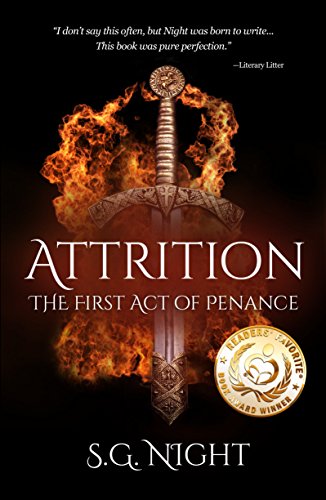 Book: Attrition - the First Act of Penance (The Three Acts of Penance) by S.G. Night

about this book: Witness ATTRITION: THE FIRST ACT OF PENANCE - the stunning debut novel by 18-year-old SG Night! Set in a rich, dynamic world overflowing with an unforgettable cast of characters, this new epic brings to life a tale of sword and sorcery, tyranny and rebellion, conspiracy and assassination, demons, love, and magic...

The mighty Demonic Dominion has held captive the nation of Io for more than a century. The Humans are in shackles. The Elves were long ago exiled. And the race of Majiski battle-mages were all but eradicated by the demons and their ilk.

Racath is among the remaining few Majiski surviving in secret. A strong but opinionated young assassin, he works from the shadows against the Dominion. But how can he and the others win a war when their Patriarch is keeping more secrets from them than the Demons themselves?

Now, as a tangle of conspiracies, secrets, and ancient prophecies sweeps Racath away, he must choose his destiny: will he become the savior of Io, or allow it die in the darkness, under the Dominion's iron fist?