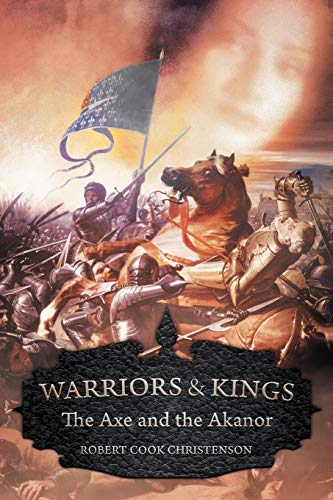 Book: Warriors and Kings - The Axe and the Akanor by Robert Cook Christenson

about this book: Intended for young adults and fiction fantasy lovers of all ages, Warriors and Kings: The Axe and the Akanor is a fast moving adventure set in a savage world where kingdoms are held be the power of the sword. The most powerful known empire, the Pyrans, are intent upon expanding their lands and capture the City of Banton, controlling its people by ruthless means. Their only hope for liberation is in a coalition of neighboring cities within its trade sphere.

A powerful warrior, estranged from his home in Banton, learns of the occupation and seeks a way to overcome the Pyrans. During his self-determined mission, the warrior, Len, encounters attacks by beast of legend. A supernatural force presence promises to aid him in his hours of desperation.

Meanwhile, Morgain, the princess of Banton is about to be forced to yield herself to the Pyran commander Lord Karn. Karn is an evil man with intentions of ruling all of Pyra. To accomplish his goal, he must usurp the kingdom from King Rama, who is on his way to Banton.
Captain Crandon, Karn's second in command, begins to have a strange affection for Morgain and attempts to help her escape from the fate that awaits her, at Karn's wicked hands. Their troubles intensify during their escape attempt, as they are captured by a savage horde of forest dwelling warriors known as the Akanor.