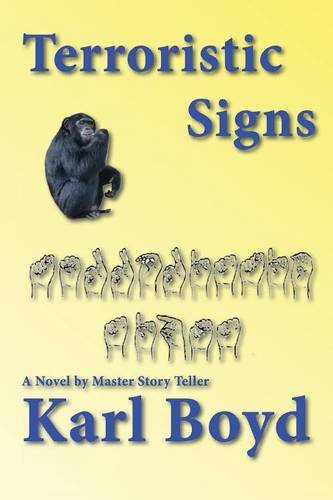 about this book: About the cover and title:

Okay, you've seen many novels with beautiful half-dressed women, or handsome hunks with a torn shirt and muscles that won't quit, and their bare chests pictured on other covers. And you know they are there to entice you to pick up the book and check the contents.
So, why is there a monkey featured on the cover of "Terroristic Signs"?
Am I "monkeying" with your mind?
No, and if you look closely, that isn't a monkey, it's a lady chimp. Her name is Sadie, and she uses our standard sign language to communicate.
The hands you see spell out the title, which is a play on words.

A short synopsis of "Terroristic Signs":

After a mute biochemist at a nerve gas facility in Sulphur Springs, CO overhears terrorists planning an attack to kill the President of the United States and thousands of fans attending an annual sporting event, he is discovered, but attempts to escape by hiding in a nearby animal research laboratory. There, he meets Sadie, and before he is killed, leaves a coded message behind by signing it to her.

Although Sadie can't possibly know the significance of the words she memorized, she literally holds the fate of thousands in her hands and fingers - a code that can lead the FBI to the date, time, location and method of delivery of the stolen nerve gas.

But now, Sadie is missing from her cage. Who has her - and why?

Finding her, breaking the code, and quietly thwarting the terror attack before it can send shock waves throughout our homeland is a challenge a few local police officers, an FBI agent, and a crafty assassin turned vigilante must solve, or 9-11 will pale in comparison.

Prior to the conclusion of this suspense-laden tale, readers will discover there are many predatory and carnivorous animals living in this jungle we call the United States; and there are only a few hunters that are worthy of taking their measure and bringing them down.
God Bless America! Or will he?

Every time I attended a football game or watched my favorite baseball team in action, I thought of the possibility of a terrorist attack on such a confined space with so many spectators, and I wondered if such a horrific event would ever happen, while hoping it never would.

But the beginning of a novel was planted in my mind. So, during a trip to New Mexico, my wife, and I held a "What if?" discussion. By the time we reached our destination, the basic plot had been established. Six months later, "Terroristic Signs" was born.

What was the hardest part of writing this novel, and what important lesson did I learn?

That would be the seemingly never-ending editing process, plus the difficulty of accepting constructive criticism from my editor and wife.
You may argue with your editor, but never doubt the wisdom of your wife's advice!

Everyone that reads it; but especially those who love suspense, mystery, and a story within a story, plus a little romance thrown in for good measure They will find them all in Terroristic Signs, and more.

What I would like my fans to take away from this novel is an appreciation of those in the law enforcement community, who, through long hours of tedious, repetitious work, and devotion to duty keep us safe from harm. Plus how lucky we are to live in the United States, where we are free to see our dreams come true.

• "If you have not read any of Mr. Boyd's books you need to begin now - I see him as one of the most creative mystery thriller writers. It amazes me that he can keep coming up with these 'out-of-the-box' plots."
— Joyce M. Gilmour, Military Writers' Society of America