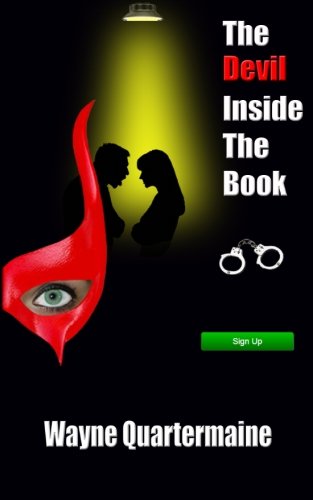 Book: The Devil Inside the Book by Wayne Quartermaine

about this book: The Devil Inside the Book is a tale of several people's lives that ultimately entwine over the web. When a discovery is made over a social media site, The Book, things get dangerous and seven people end up dead. I started writing this book after watching the news one day, the reporter came on, and the story was of a young woman being lured by someone over a social media site to her death. The next day I heard nothing more of this tragedy, it was like it never happened. I wrote this book specifically for the mystery suspense kind of readers, but truly this book is for anyone who uses a social network or dating site. The benefit of this book is that people, I hope, can open their eyes to some of the pitfalls of using the net. Social networking is great, I love it, and use it daily, but we still have to be careful, there are still people out there using the net with ill intent.

I started this book in January of 2013 and finished in May of 2014 so it took me just over a year to write this novel. I love to read the newspaper and always consider the newspaper to be my book. I then thought of all the violence and murders written about in the papers and figured some of these people have to be using social networks also. So that's when I came up with the name. I chose this cover because the killer is disguised, hence the red mask. The victims were lured over social media, that's where the sign up button came from, and the victims were handcuffed which explains the cuffs. The hardest part of writing this book was the characters, each had their own personality, and that to me was very difficult, especially the part of the women. I would ask women questions about what they would do in certain situations and lay out different scenarios for them. So for that I am thankful for all the women who participated in my line of questioning. I would like to say to all my readers, and social network users, that anyone can be hiding behind a picture on social media, so we must be careful.