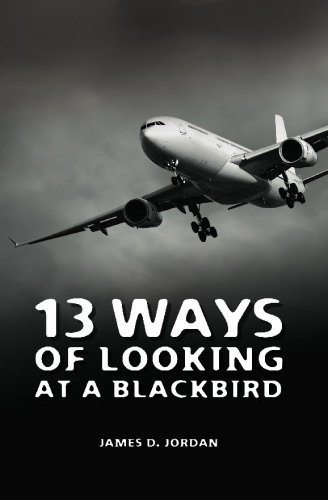 Book: 13 Ways of Looking at a Blackbird by James Jordan

about this book: We've been obsessed lately with a lost plane flight. Why? We are all on a lost plane called life that will not end well. Paul Thurber's flight is Greenjet #1220 and he is told by a stranger that it is doomed to crash. The Being tells him he must not try to save it, and he should be thankful that he is one of only four survivors. After visions of what will happen haunt him, Paul decides to try and save the plane. As events start to happen just as he foretold, the passengers and crew are forced to respond. Should the pilots heed his warnings? As the pilots change their flight plan, a different scenario unfolds, Paul may have made matters worse. Now there may be no survivors! Woven around Wallace Stevens's classic poem about the fear of death, "13 Ways of Looking at a Blackbird" subtly captures the reader and doesn't let them off the plane until the end. Paul becomes friends with the other three prophesied survivors, most notably Sonia Petra, who becomes his first love. They are his allies and the only other people on the plane who can hear when the Being speaks through a passenger or crew member. 13 Ways of Looking at a Blackbird is a theological romance thriller in the skies.