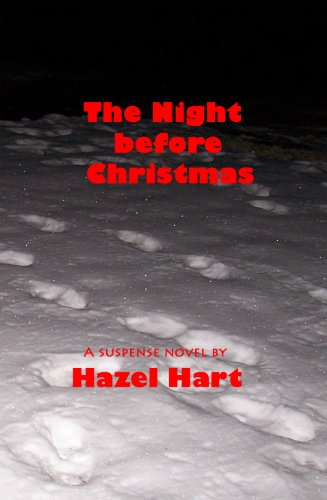 Book: The Night before Christmas by Hazel Hart

about this book: I sometimes joke that The Night before Christmas, which took thirty years to write, started out as a contemporary novel but was historical by the time it was published. I got the idea from a news report I heard while I was driving. The reporter said a man had killed his children on Christmas Eve. I couldn't help crying and wondering, "Why would someone do that?" The Night before Christmas is my answer to why, but it is not based on the real crime. It was a story my heart told me. It took so long to finish because I had trouble getting the ending others could accept without violating my characters by making them do things they would not. After all, my reason for writing the book was to answer the question of why. A forced ending to satisfy others would not provide that answer.

The first characters who came to me were Betty Myers, who became a mother at sixteen, and her three little girls: Andrea, in first grade; Melissa, in Kindergarten, and Tina, three years old. Without a high school diploma or work experience, Betty must decide whether to apply for welfare or take back an abusive, alcoholic husband who has declared his love for Betty and their girls and promised to stop drinking.

The second character was Betty's husband, Wes Myers. When Wes was four years old, his father killed his mother and committed suicide. He is still haunted by the sight of their dead bodies on tables at the funeral home, an experience forced on him by his grandmother, Sadie Myers. Raised with Sadie's warnings about sins of the fathers being visited upon their children, Wes struggles to understand and follow the teachings of the fundamentalist Christian religion he grew up in even as he drinks to excess. He wants to do right but fears he is damned because of his father's sins. After a night of drinking and praying, Wes has a vision of Jesus promising to help him regain his family, and he has hope.

The last major character to be developed was Sadie Myers, Wes's grandmother, a God-fearing woman who is seeing the third generation of fathers and sons fall victim to alcoholism. She daily prays for Wes's salvation, and when he reports his vision to her, stops drinking, and begins attending church with his wife and children, Sadie believes her prayers have been answered—and then, on Christmas Eve, the worst thing happens.

When I started writing the novel in the 1970s, I intended to call it Sins of the Fathers. However, about the time I finished what I then thought was the final draft and began marketing the manuscript, another novel with that title became a best seller. That is when I changed the name to The Night before Christmas. Friends have told me that I should call it something else because of the famous poem by that name, but I think the title fits. What do you think?