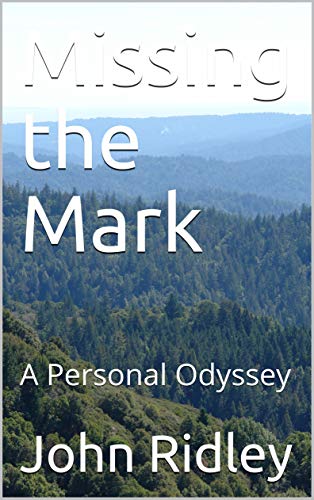 about this book: The Appalachian Mountains, with its unique blend of cultures where ancient King's English, Native American, and plain redneck language is employed. It was not until I travelled courtesy of the US Army and met people from all areas of the US and even some foreigtners, including Yankees, that I realized that my growing-up experiences provided more enriching material for a novel than those experienced by most others. I have always enjoyed reading and have done so since pe-school days, but was so busy with life that I was unable to entertain the idea that I could write. So, about 15 years ago, I began to write, and one book led to another. I have successfully published several textbooks, some unpublished poetry and now have the novel entitled "Missing the Mark" as an entity on Amazon.com, an effort that encompassed about three years of sporadic writing. There are other novels and non-fiction efforts that are on-going.

The title was born of the Greek term for sin, which means 'missing the mark' and is also linked to one of the clues in this suspense mystery. I would hasten to add that there are other books with this title, but as far as I know, I copyrighted this title before the others were assigned this title, and the story was submitted to the US Copyright office in the late 90's or early 2000's. I love imagery and am somewhat of an artist, so I believe that my visual and duadio presentations in words transmits the message that can draw the reader into the story as a part of the story. The hardest part of this story was in writing the ending where all the aspects of the sstory coalesced into a meaningful ending.

The research involved talking to relatives and those I met who were garrulous enough to share their stories, but the principal characters and the events have been changed sufficiently to prevent identification of the characters. Just as oen who is Mirandized, I have a long memory so whatever someone says to me may and possibly will be used in a story (eventually). I realized that my love for literature was greater than what I had ever imagined and that my early voluminous reading left an indelible desire to also produce literary works. In addition, as a retired college instructor, I am unable to resist the opportunity to teach the readers, and this is much to my long-suffering wife's chagrin.

I hope that the readers of this story will develop a greater respect for the hardship and industriousness of the Appalachian people, and that the reader will enjoy the book as much as I enjoyed writing it as an act of telling my own story. I have incorporated many of my own experiences including military duty and my chosen vocation to enhance the story.