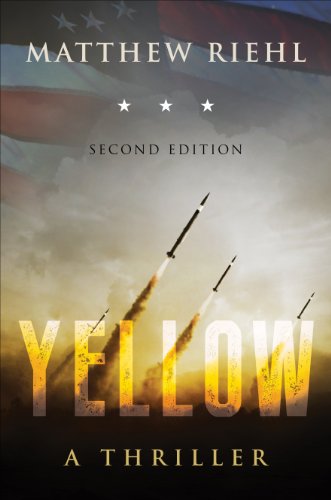 about this book: "Yellow" is the story of an ordinary man, Jax Wright, who accidentally finds himself entangled in the worst act of espionage in American history after he overhears a conversation at a bar between one of his underlings at the military proving ground where Jax is lead technical editor and a high-ranking member of one of the world's most notorious terrorist groups, who use Jax's name as a tool to recruit others. The topic of discussion is Goliath, the most sophisticated and deadly weapon ever created, which in the hands of Hamas represents Israel and America's worst nightmare.

With his name dragged into such treasonous acts, Jax decides to do some investigating and is framed and wrongfully arrested for the crime. While on bail, and with the help of his father, a former FBI agent, and two other retired law enforcement agents, Jax and his band of over-the-hill brothers ensue in a high stakes game of cat and mouse with the terrorist group in an attempt to expose the real traitor, clear Jax's name and prevent multiple imminent terror attacks.

• What inspired you to write this book?
My passion for writing and an idea that occurred to me as a result of the knowledge I obtained by actually working at a military weapons testing facility were all the motivation I needed.

• Who are the primary readers of your book?
My readers are people who enjoy fast-paced mystery/suspense/thrillers centered on espionage, where good is pitted against evil in its purest form, with mind blowing twists and an all-time shocker of an ending.

• How long did it take to write it?
It took me about a year to write, edit and polish the novel.

• How did you come up with the title?
The title "Yellow" has allegorical significance and is tied directly to the story's plot. It was inspired by the song by Cold Play. The original title, "The Patriot," was too generic. I think "Yellow" makes it unique and mysterious, as the word, with no context, means practically nothing.

• Why did you choose this cover?
The cover is unique and provides a visual representation of the novel's content.

• What was the hardest part of writing your book?
The editing and polishing were the most difficult parts. The writing came easy and fast, not even six months.

• Did you do research for your book?
I did research the book to ensure the content is accurate and the narrative is credible. To create a credible narrative, I drew upon my extensive knowledge of the locations where the action takes place, the knowledge I gained as a result of working at the test facility and hours of online research.

• Did you learn anything from writing your book and what was it?
I learned that although it is fun to write a novel it is very difficult to write a good novel that people will actually want to read. I also learned the level of devotion and sacrifice necessary. Most of all, and to my surprise (I went into this thinking about potential fame and fortune), I learned that the satisfaction is in the journey, not the destination.

• What do you want to say to your readers?
To my readers I simply want to say fasten your seatbelts and enjoy the ride! You will be glad you did.