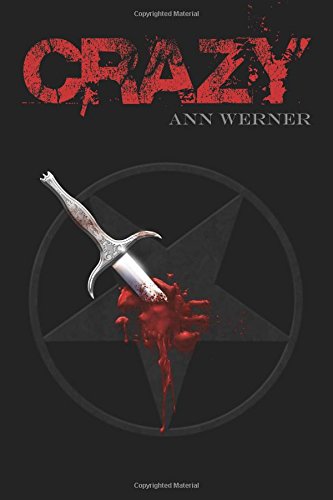 about this book: CRAZY is the story of Emily Simonson, a budding celebrity chef, whose celebrity incites a deranged response from someone with an ax to grind. That someone starts out with nasty messages but rapidly progresses to much more sinister activities. Aspiring actresses who bear a resemblance to Emily are being abducted and murdered and before each murder, Emily is sent a harbinger of things to come. It's only a matter of time before it's her turn to die but she has no way of knowing when that will be, for the killer takes pleasure from toying with her.

CRAZY has been a long time in the making, I first wrote this thriller ten years ago under the title The Happy Face Killer. Then I found out that while I was writing my fictional account, someone else was writing a book about a real-life serial killer known as the Happy Face Killer (go figure!) and that was the end of that! The real guy wasn't nearly as imaginative or inventive as mine but still… So I had this entire novel written with nowhere to go with it.

Life intervened, I wrote some other novels but I always kept coming back to that one, trying to think of the best way to get it out there. So last year I pulled it up, did a complete rewrite and voila! It's better than ever!

When I finally finished, there was the matter of what to call it. My previous title was out, but I wanted something with punch. My daughter and business partner came up with it in an offhand remark, but as soon as she said "You should call it Crazy," I knew she was right.

As for the cover, we went through several iterations before settling on the final result, which I think is absolutely spectacular. Thank you to Ralph Faust, our talented designer, who always manages to provide us with the most amazingly brilliant artwork.

The most difficult part of writing the book, aside from the fact that writing a book is a very difficult venture, if only because sometimes it feels like nothing is going right, I'd say that going through The Satanic Bible wins hands down. My killer is fueled by Satanic fantasies, so I wanted to delve into the mind of a person who would be influenced in such a way. Less difficult was the research into spells and witchcraft, which aren't the same thing as Satanism at all.

Anyone who loves a thriller will enjoy this novel. I'm an avid reader and a stickler for form. I read a lot of Indie novels and am disappointed when spelling, punctuation, grammar and formatting are overlooked or ignored. I just can't get past bad form and feel that if you ask people to read your work, you owe it to them – and to yourself as an author – to make certain that the experience is a good one. My Is are dotted, my Ts are crossed, my paragraphs are indented, my spelling is checked and my grammar is sound but most of all, I know it's a great story and if you like thrillers, you're going to like this one.