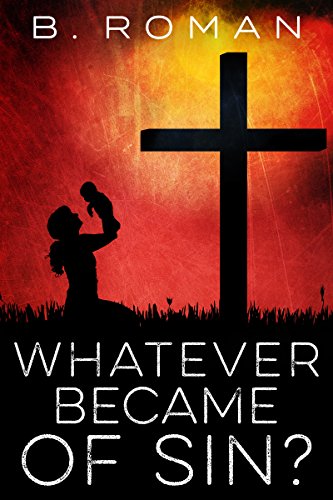 Book: Whatever Became of Sin? by B. Roman

about this book: Whatever Became of Sin? is a story I never imagined I would write, considering my penchant for more metaphysical subjects. But it was a "grounding" experience to keep me creatively engaged when my ideas for my Trilogy went dry. It's a character driven story of racial hatred and sexual obsession that lead to a heinous baby switching scheme to cover up murder and political conspiracies.

The past twelve years of Michael Warren's life begin to unravel on a flight from San Francisco to New Orleans, a stopover on Warren's trip to Washington, D.C. to testify before a Senate Committee. As an avid environmental lobbyist, this would be Michael's opportunity to destroy Hardin Westwick's plan for a housing development built on land tainted with the same kind of toxic waste that killed Michael's six-year-old daughter, Dominique.

An audio cassette handed to Michael by a stranger on the plane is thought to contain damaging evidence against Westwick. Instead, it renders his daughter's life and death a lie: Dominique was not Michael's real daughter, for his real baby girl was kidnapped at birth and replaced with another newborn -- while the whereabouts of Baby Girl Warren would forever be unknown.

When the stranger dies in a bizarre murder mid-flight, Michael is sidetracked in New Orleans, where he and his family once lived. Here, two enigmatic people further complicate his life: the stunningly beautiful Celia Stone, a New Orleans obstetrician; and Madison Bouvier, the dapper, ambitious New Orleans district attorney. Michael hopes to enlist their aid in finding his real daughter but, instead, they surreptitiously thwart his every move to conceal the truth about this monstrous deceit. While it seems that the doctor and the D.A. are both playing against Michael, in truth they are playing against one another, each with their own agenda for revenge and profit.

To further complicate matters, Michael's wife Elaine now resides in Twelve Oaks Sanitarium, seemingly contented to dwell in her illusionary world of ignorance to the truth about Dominique's death. Michael is tormented by his inability to break through to Elaine and by his passionate attraction to Celia Stone.

Michael's search for his daughter leads him into the colorful but superstitious Cajun culture and its surprising ties to his own family. This discovery brings on an assassination attempt as well as the murder of a well-known but contemptible radio personality. But an even more heinous truth lies in the motives for the baby switch and in the fact that it was...well, I won't disclose these details.

When Michael discovers the truth about who was involved, he is faced with the most difficult decision of his life: Shall he expose them all and jeopardize his daughter's well-being? Or shall he submit to their conditions in order to bring her safely home? The shrewd compromises he must make in order to see justice done provide the surprising and satisfying ending.

Video: Whatever Became of Sin? by B. Roman