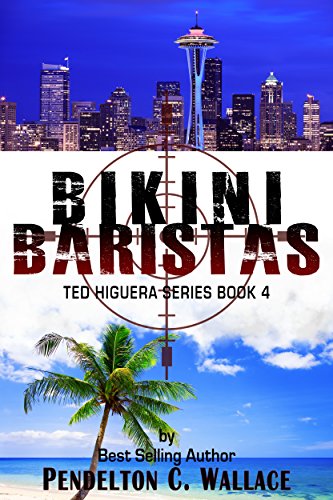 about this book: Like all of my books, Bikini Baristas is based on two true stories. During the same time period the story of a missing bikini barista stand owner and of a teenage runaway who went on an international crime spree dominate the Seattle headlines.

When I read about these stories, I know they were cases for Ted Higuera and friends.

Mix a shady bikini barista stand owner, a discontent teenager, a computer wiz and a sexy female PI and what do you get?

Dick Randall is the owner of a chain of bikini barista stands in the Seattle area. Clayton Johnson-White is a teenage kid who thinks he's smarter than the rest of the world.

Dick's pickup truck is discovered burned-out in the California desert. What happened to him? Did he fake his death to escape his sleazy past or did the past catch up with him?

To get away from his trailer-trash life, Clayton drops out of school and runs away into the woods of Camano Island. He breaks into vacation homes and steals what he needs.

Private detective Catrina Flaherty is hired by Dick's wife to find out how he disappeared. When she and her partner, Ted Higuera, start turning over stones, some shocking things come crawling out.

Ted's best friend, Chris Hardwick, has his first case as a grownup lawyer. He is assigned the Clayton Johnson-White file. He expects to do a quick plea-bargain and get on with his life. Instead, he finds Clayton has evolved into a professional criminal who teaches himself to fly, steals airplanes and goes on a crime spree that spreads from Washington to the Bahamas. Chris, Ted and Cat are intertwined in a case that takes on international proportions.

What do these two cases have in common? In the end, they come together with the force of two colliding freight trains.

Other books by Pendelton C. Wallace