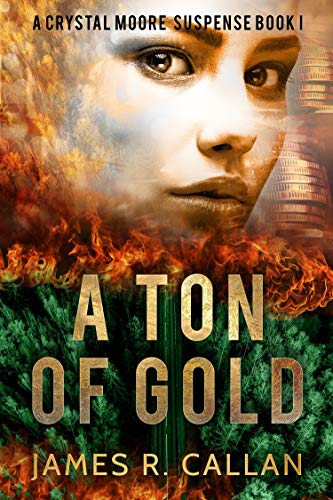 about this book: Can a 185 year-old folktale cause murder, arson and kidnapping in 2012? In A TON OF GOLD that's what happens. As S. Sehon, an Amazon reviewer, said, 'From the git-go, this story grabs your attention and hangs on to it through to the very end." Another Amazon reviewer, Nickolina, said, " It is on my 'read it again' list now, and not that many books make it to that list."

Crystal Moore, a young computer scientist, learns that someone is trying to kill her 75 year-old grandmother, and no one has a clue who or why. As she struggles to answer those questions, the man who drove her out of graduate school just short of her Ph.D. is coming back. This time, he is in a position to destroy her career.

As she tries to find clues, her office is fire-bombed. Rather than collapse, she enlists the aid of a former bull rider. But in the end, it is Crystal and her no-nonsense grandmother who must capture the killers. As for her former professor, it will be up to Crystal and her street-wise housemate to deal with this famous authority.

Caleb Pirtle, Editorial Director of Venture Galleries, said about A TON OF GOLD, "James R. Callan is a master of understanding human conflict and the raw emotions that everyone faces, especially when they are on the brink of losing everything."

A TON OF GOLD is a contemporary mystery/suspense that got its impetus back before Texas was a state. It's a smooth read that will have you either holding your breath, or laughing out loud.