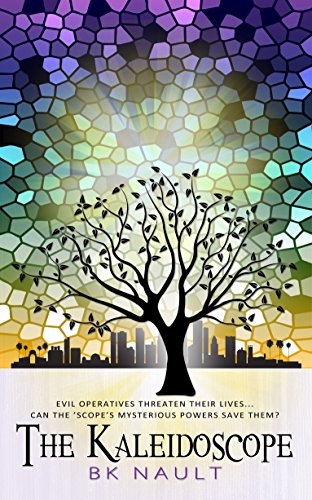 Book: The Kaleidoscope by B K Nault

about this book: • The backstory of "The Kaleidoscope"
The Kaleidoscope is a fun, somewhat magical adventure of a flawed hero who has lessons to learn and bad guys to put in their place when he's forced to pull himself together and save the world. Central to the action is a magical kaleidoscope that encourages us all to color outside the lines of our imagination.

• The Hero
Harold is a brilliant but socially inept computer forensics expert who is also a bit of a know-it-all. To prove he's a nice guy, management material and worthy of a promotion, he tries to give a homeless man a handful of change. But he finds himself instead the unwilling guardian of a magical kaleidoscope that spins his life from black and white boring to Technicolor danger with the first few twists of its mysterious dials. Then one by one, the 'scope begins revealing glimpses into the future to anyone willing to look, and the former loner becomes the center of a pursuit that's been building to a world-changing clash of power for decades.

• The Cast
With an eclectic cast of new best friends, including Pepper, a breast cancer survivor grabbing hold of life for all its worth, to a Rastafarian with secrets of his own, the new friends find themselves working to save the 'scope from falling into the wrong hands while discovering who and what lies behind the mysterious device's futuristic technology.

• Dear Reader
If you enjoy colorful tales of discovery filled with humor, adventure, danger, romance and mystery, you'll enjoy Harold's journey. One reviewer said, "the novel hits different chords; being at times inspirational, metaphysical and scientifically speculative even while following a thriller-like narrative."

• Cover Design
The cover art includes Harold's hometown in the Los Angles skyline, the oak tree under which many of the story's epic twists occur, and the stained glass backdrop that reflects the colors of the inner workings of the Kaleidoscope itself.

Do you dare look into "The Kaleidoscope?"