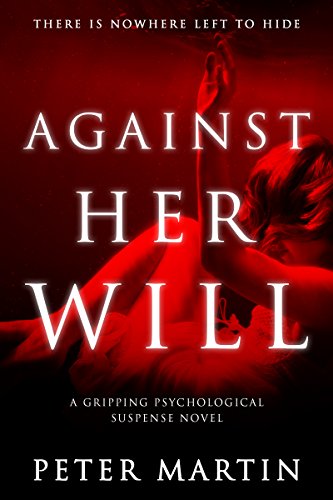 Book Review: Against Her Will by Peter Martin

about this book: Rape is every woman's worst nightmare, an act so vile, so devastating, it robs the victim of any sort of dignity, leaving scars that can last a. lifetime. Having family and friends rally round can make all the difference in the world. But without this support the victim may never fully recover.

Donna is such a victim. When she is brutally raped, her life comes crashing down, bringing with it memories of an unhappy childhood. Having lost everything dear to her, she almost succeeds in making the ultimate sacrifice, but for a young male nurse, who slowly helps her come to terms with the past. Just when she thinks she's over the worst, she makes a horrifying discovery that puts her in mortal danger.

• What inspired you to write Against Her Will?

I've always felt strongly about how rape affects women, and how few of these women ever report these crimes to the police. Of those reported, many never come to trial and if they do conviction rates are low. Therefore I wanted to write a book from the victim's perspective, to give an idea what she has to go through, and show how it can even destroy lives.

• Is it challenging to promote a book with tough subject matter?

Yes, it can be challenging, but I believe in my characters and the subject matter. It has been difficult to promote, but I feel if people read the book, they will see I have written the book in a sensitive and compassionate way that highlights what a woman has to go through and how it can affect and blight their lives forever.

• Do you feel Donna is a character who reacts realistically to her plight?

Donna had problems before she was attacked. She found it difficult to deal with the way she looks, having been pushed into the spotlight from an early age, against her wishes. Having overcome this in later life, the rape became a catalyst that brought all her other problems back to the fore again.

• Do you feel that books which tackle this issue in the way you have will bring light to women facing the same struggles after an attack?

I hope so. More women need to be strong to bring these men to justice. They must be made to realise these attacks will not to tolerated and only way to do that is for more women to come forward. I feel the sentences should be longer to ensure that certain will be deterred from committing these acts. At present these people will only spend a short amount of time in jail, in comparison with the victim, who may not ever fully recover from what has happened to her.

• Do you feel that women who deal with issues related to assault both sexual and/or physical get enough care and understanding after such traumatic events?

No, I don't. Whilst I agree that the police in the main do deal with these crimes in a sympathetic way, what victims have to go through at trials, can be as difficult as the crime itself. There is always the feeling that the victim asked for it, by the way she dresses or acts.

• Do you think you'll keep writing suspense novels of this type or will you tackle other subjects as you continue writing?

I will continue to write novels like this if I feel strongly about a subject as in this novel. My next novel is about a young boy who runs away from home and goes missing, and how it affects his family.

Born and bred in the West Midlands, Martin writes under the pen name of Peter Martin. Against Her Will is his debut novel, and is the story of one young woman's fight to lead a normal life after a horrific rape.

Against Her Will by Peter Martin

I think, it is a very good book because the writer is a man condemning the bad act of evil men negatively and also called for stricter punishment for perpetrators. Even though, some women raped before, may not like to have anything to do with a man but I appreciate the writer. He cares about woman and would like to bring to and end to the ordeal suffering that women go through. Good work keep it up. [by Bertha]