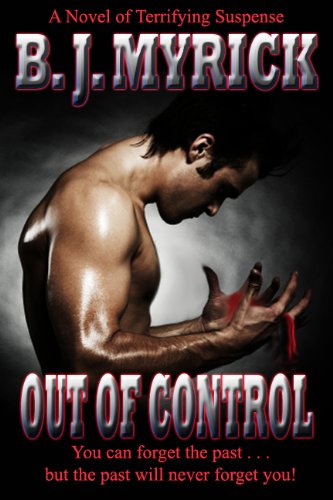 Book: Out of Control by B.J. Myrick

about this book: Imagine having car trouble on a back road and being forced to spend the night in an isolated campground, your heart pounding in terror as a band of druggies' roars around your camp site in a pickup truck. What if the encampment is locked at night to keep non-paying folks out, making escape impossible?

The idea for my suspense thriller, Out of Control, is based on an actual incident that happened to my sister and me in an Oklahoma campground as we made our way home to Kansas from our vacation. We stopped to spend the night at a forested retreat with a rustic swinging bridge that spanned a deep ravine. The campground perimeters were enclosed by a tall, spiked fence, and the gate was locked.

We discovered the camp was a hangout for the drug crowd. As the evening progressed, the crowd grew wilder and fights broke out. We retreated approximately three hundred feet from the group, trying to keep a low profile as we built our fire to roast polish sausages. Since the group was so frightening, we didn't set up our tent, deciding instead to use sleeping bags. As the night grew late, the group settled down, and we decided it might be safe to sleep. We crawled in our sleeping bags and dozed off, only to be awakened by a loud revving of an engine and bright headlights racing toward us. Blinded by the glare, groggy with sleep, we froze in terror, tangled in our sleeping bags. I thought we were goners, but at the last minute the driver slammed on the brakes. The truck backed up and raced around the campground with its lights off; then a few minutes later we heard a crash.

From the incident grew "Out of Control," a suspense thriller that begins one woman's journey into fear when an apparition of her dead father appears to warn her of danger. Her sister scoffs at the vision and refuses to cancel their vacation to Oklahoma. In a remote campground they meet Doyle Riley, a twisted man with a twisted past, who turns their dream vacation into a horrifying nightmare. So . . . take a walk on the dark side from the safety of your armchair and enjoy the story, and if you do, would you leave a comment?

The video below was uploaded in 2012 to coincide with the publication and promotion of the novel, and the book cover has been changed.

Video: In this Keyhole Conversations video, B.J. Myric reads a favorite scene from her novel, "Out of Control"