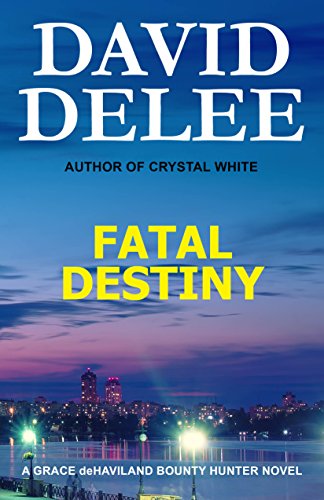 about this book: FATAL DESTINY
Chapter One
God must hate me.

Here it was, just the second week of October and a cold snap had moved into the area, plunging the temperatures to near freezing already. Unseasonably cold, the TV weather people said. A stalled Canadian cold front, they explained. Yeah, right. I knew what was really going on. It was God. I could hear him up in heaven, telling the angels with a laugh: Grace deHaviland's doing surveillance. Let's make it cold as a cadaver's crotch down there.

I cupped my hands and blew into them. Damn.

Parked in the Grandview Heights section of Columbus, I'd been sitting for hours in my beat-up cargo van in the shadows of an overhanging elm tree down the road from the only working lamp post, my full attention on a dilapidated old colonial across the street. The house was one on a block of rundown homes earmarked for demolition, something the city never seemed to get around to. In the meantime, they became havens for drug dealers, users, crack whores and the homeless.

This one had a large front porch. The paint on the wide steps was worn to the wood and the once-white railing had so many spindles missing it looked like a boxer's punch-drunk grin. A rusted glider was set off to one end and an old, moldy couch sat under the large front window. The cushions on it were so worn out, they sank. Broken crack vials, fast food wrappers and a busted up tricycle littered the yard. An old box spring and rusted iron headboard leaned against the peeling siding. Junked.

I covered the light of my cell phone and checked the time: 6:30 a.m.
The darkness before the dawn.

A lone figure rounded the corner, coming from Avondale Avenue, and walking in my direction. His hands shoved in his pockets, he had his hoodie pulled up over his shaved head to ward off the chilly, pre-dawn breeze. I checked him against the mug shot I had of Tyrell Parks. It was my guy.

I opened the well-oiled van door without a sound. The dome light remained off because I'd removed the bulb months ago. The van's decrepit appearance—I'd picked it up at auction about a year ago—its dings, dents and splotches of matte-black primer paint were deliberate, all carefully applied so no one looked twice at it. Yet mechanically, its care and maintenance was top shelf, as good as money could buy. The perfect decoy vehicle.

Jogging across the street, I avoided the splash of piss-yellow streetlight, and carefully navigating my interception point, I jammed my hands into my jacket pockets too, returning the mug shot of Tyrell Parks to one pocket and wrapping my hand tightly the stun gun I carried in the other. My Colt .45 auto-loader sat snug and heavy in its holster, pressing into the small of my back. I didn't have to check for my backup piece, either. The weight of the small .32 revolver strapped to my right ankle was hard to forget.

I crossed in front of Parks, about an arm's length away, blocking his path. "Tyrell Parks."

He snapped his head up. Dark, suspicious eyes stared at me. I grabbed for his arm but he bolted around me fast, dodging like a linebacker avoiding a tackle so that I ended up snatching air. He ran for the ramshackle old colonial.

Up the worn steps two at a time and across the porch, he plunged through the front door, slamming it shut behind himself. Running close, two steps behind, I reached the decaying wood-and-glass door and paused, pressing my back against the clapboard frame. My heart pounded from the adrenaline surge, not the effort. I took a deep breath of cold, crisp air, drew my .45, spun and kicked in the old, weathered door.

The latch splintered inward. The door banged against the far wall with a sharp thwack and a rattle of glass. I rushed inside. Low. In the entryway, an absence of light greeted me save for the pale glow from the outside streetlamp and what little moonlight managed to leak in through the door and broken windows. Dust particles danced in the pale, ghostly hue.

I faced a center staircase. Beside it, down the left side, ran a hallway. Open archways dotted the left wall. What had once been a living room lay to my right, and opposite that, a den. Wind whistled through windows where panes were broken or missing. The walls were graffiti tagged. Broken boards, cinderblocks and other building debris littered the floor and chunks of sheetrock and gravel crunched under my feet as I moved inside.

A skinny Hispanic teen stood frozen in the den, watching me. Shirtless, he had his fly open. I'd caught him urinating in the corner. He stared at me with wide, fearful eyes as his breath puffed out quick plumes of cold air.

I shoved Tyrell's mug shot into his startled face. "Where is he?"

He shook his head, muttering something I didn't catch. I jammed the picture into the pocket of my leather coat and pressed the .45 to the kid's forehead. His wide eyes grew wider. I wrinkled my nose. Ewww. He'd started peeing again.

His answer came out as one long, fast word. "UpstairsIdidn'tdonothingpleasedon'thurtme."

"Gracias." I took the stairs two at a time.

At the top of the stairs, an open bathroom faced me, reeking of feces and vomit and urine. I cleared a small room to the right with a quick glance and sweep of my gun.

Down the far end of the hall I heard a door slam.

Moving quickly, I made my way forward. Darkness filled the hallway. The air was thick with cloying dust and odors too offensive to try and identify. Open doorways stood both to my right and left. From inside came the sounds of irritated druggies rousted out of self-induced comas by the commotion. They shifted and groaned. A few shouted curses. Others remained dead to the world. Those who woke, like rats sensing danger, sat upright, listening, afraid to move and afraid not to, their addled brains racing at the speed of glaciers to make a decision. Freeze, hide or run.

At the end of the hall, I hit the one closed door I came to with my shoulder. It gave a little then bounced back. Not locked—someone holding it.

"Tyrell Parks!" I shouted, shouldering the door again.
Pain radiated down my arm, but this time it flew open.

Inside, a soiled mattress lay on the floor. Around it were some grubby blankets, matches, candles and other drug paraphernalia. Dull light streamed in through a busted window. Tattered, once-white lace curtains billowed from the window frame. The sash was thrown open.

Climbing out to the porch roof, Parks banged a knee on the sill and cursed.

I darted fast across the room. Crack vials and who-knew-what-else crunched under my sturdy black sneakers. I grabbed Parks by the belt…and yanked.

His hands scrambled to hold onto the sill as his baggy, oversized pants slipped down his hips, exposing even more of his purple boxers. He banged an elbow on something, cursed again and fell back into the room. At six-one, two-hundred-twenty pounds—all of it prison yard muscle—he was built like a bull on steroids. All of that came stumbling back at me.

We hit the floor, hard.

I grunted, worried I'd cracked a rib. Shoving him off, I gasped for air and rolled in the opposite direction. Things jabbed at me through my jacket, rusted nails, broken glass. I worried about needles, and my jacket.

It's a Piero Tucci, damn it. If it's ruined…

I scrambled to my feet, spun to face him, trying to control my breathing. If I appeared winded, Parks would see me as weak. I couldn't allow that. Being a woman in this business caused me enough grief as it was.

"Tyrell Parks," I said. "You're coming with me."
"Youse the cops?" On his feet too, he faced me.
• "Bail enforcement."
He cocked his head to the side like a confused puppy. "Say what?"
• "Bounty hunter, asshole."
• "Shit. A sista like you? No fuckin' way."
I brought up the .45, reluctant to shoot him. They don't do dead or alive anymore. Too bad—it would make things a lot easier. "No sista, bro, a hot-blooded Latina with an Irish temper. Someone you don't wanna mess with."

I planted my feet. Reading him, afraid he might lunge.