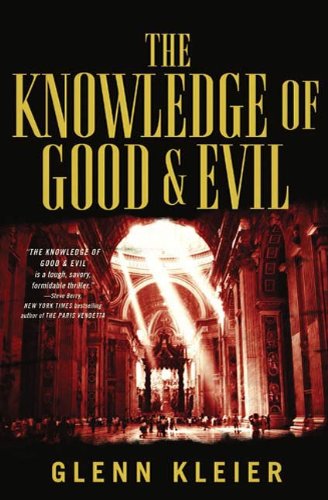 Book: The Knowledge of Good & Evil by Glenn Kleier

about this book: PUBLISHERS WEEKLY: "Kleier's undeniably gripping second spiritual thriller is bound to provoke just as many arguments as his controversial first novel, The Last Day. The Knoweldge of Good & Evil is first of a trilogy, and Kleier's many fans will only hope they won't have to wait long for the next installment."

NATIONAL BOOK CRITICS CIRCLE/CNN THE INSIDE VIEW SHOW Top 10 Book of the Year: "5 Stars. The Knowledge of Good & Evil is a tasty morsel for the intellect and spiritual risk taker...an enchanting interlude that goes where no book has before."

Inspired by a true story:

On December 4, 1968, theologian Father Louis Merton visited the ancient Dead City of Polonnaruwa, Ceylon, entered the Cave of the Spirits of Knowledge, and experienced a vision. It's claimed he found a backdoor to the afterlife. That he looked into the Mind of God and escaped with a secret so powerful it could change all humanity. Bring wars to a standstill. End forever the age-old hatreds between races, creeds and cultures.

Six days later as Merton prepared to announce his discovery, he suffered a horrific death under mysterious circumstances. But the secret did not die with him. He left behind a journal.

Decades pass and beautiful psychologist Angela Weber and her troubled fiancé, Ian Baringer, are on the hunt for Merton's long-lost journal and its door to the afterlife. Angela, an agnostic, wants to help Ian heal the wounds of a traumatic accident that took the lives of his parents. Ian, a fallen priest, no longer trusts in religion's promise of eternal life. He must know for certain if he will see his parents again, driven to find out firsthand what lies beyond and what it holds for mankind. And he stumbles across the means.

Together, he and Angela will plunge into a global chase, pursued by a shadowy cult, dead bodies and destruction in their wake. To succeed, they must defy the gates of heaven and hell to learn a secret hidden from the world since the dawn of time . . .

The Knowledge of Good & Evil.

Video: The Knowledge of Good & Evil by Glenn Kleier