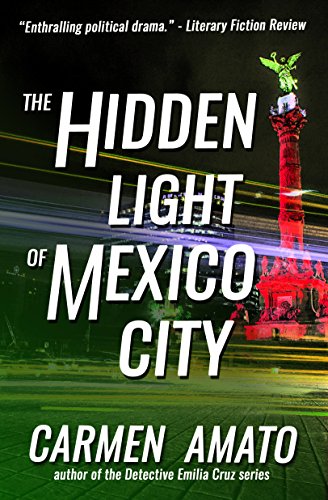 Book: The Hidden Light of Mexico City by Carmen Amato

about this book: THE HIDDEN LIGHT OF MEXICO CITY started out to be a book about the social structure of mexican society. After all, I'd experienced it firsthand.

We lived in Mexico City, an American family embracing a new culture, exploring a vibrant city, and meeting people who were to impact our lives for years to come.

Our house was at the start of the school bus route going home. My children had a 10 minute ride. Her name was Marit and her children rode the same school bus as my children.

We met at the end of the school day when her chauffer-driven car parked in front of the house as I waited by the gate for the bus to drop off the kids. Marit got out, wearing a stylish dress, heels and ropes of gold chain, and introduced herself. They lived at the end of the bus line, she explained, and while she wanted her son and daughter to have the experience of riding on a school bus, it took too long. In future her children would get off at our house and be driven home by the chauffeur.

We spoke a number of times after that, me in my jeans on the stoop and she in her designer clothes from the window of the car. When she learned I was new to Mexico City she took it upon herself to give me a tour of the best shops and restaurants in our neighborhood. The children and I were invited to a midday meal with her husband and children. The event included a tour of their house-about 15 minutes away-and a stop in the kitchen to view the 5 uniformed staff and present my compliments to the cook in her white jacket.

Soon after, Marit came over for coffee before meeting the bus. Our housekeeper, a wonderful young woman whom we did not require to wear a uniform, met us in the living room. I introduced them as I would any two people, using full names. To my surprise Marit immediately addressed the housekeeper using a common nickname rather than the housekeeper's actual name. The grilling about work hours came next. It was an effective and not very subtle message: the housekeeper was getting above herself using her full name, not wearing a uniform, and leaving the kitchen instead of waiting to be assigned her work.

Marit also called me the next day and took me to task for not making the housekeeper work more hours-a day maid should show up to work at 7:00 am at least. By asking the housekeeper to come at 10:00 I was only encouraging her to become lazy. I should note here that my husband generally referred to the housekeeper as the "Mexican Tornado" for her amazing work ethic.

There were no more coffee or lunches after that but the final break came when Marit called to ask if, as an American, I could get her maid a visa. The family wanted to go to Disneyworld and take their maid to look after the children in the evenings. The visa process took alot of time, Marit said. If the maid had to stand in line at the US Embassy she'd miss work.

I replied that I had no ability to obtain a visa for her maid and I never heard from Marit again. The car no longer stopped in front of my house to pick up her children.

Mexico City was home to many other women like her. In an odd way they inspired me to write a book to explain what I saw. There's a caste system in Mexico that bottles up more people than just the Mexican Tornado. So escape it, people will mule drugs or risk an illegal crossing into the United States. Or both.

So in the spirit of "show, don't tell" my book became a political thriller. Walk a few miles in the shoes of Eddo Cortez Castillo, the attorney who uncovers a link between Mexico's Minister of Public Security and a notorious drug cartel leader, or Luz de Maria Alba Mora, a woman battling to survive at the bottom of Mexico's social ladder. Let me know if you glimpse a bit of Marit along the way.