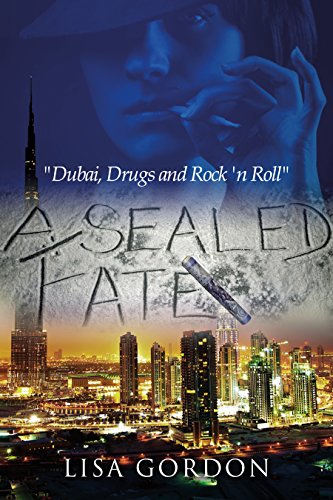 about this book: The book is a unique blend of contemporary fiction and thriller in an unusual setting and with an unusual theme at the centre - the concept of sacrificial and compensatory karma.

The author revs up the tension with her main character, the singer and wannabe rock star, Valda, who speeds through life in a sequence of emotional car crashes until she washes up on Dubai's shores at the feet of the mysterious Sheikh, who, whilst pretending to be her patron, has his own needs to satisfy. And boy does Valda satisfy them until she realises, when in very deep, that she has predecessors with the same experience. The only problem is she can't consult them because they are all dead - in suspicious circumstances. Her clandestine relationship with the Sheikh, propels her further into a murky web of deceit, and she turns to Larissa for help. As an astrologer, Larissa predicts that Valda and the Sheikh's destinies were sealed from the moment of their first meeting; however she keeps the dire fate that she reads in the charts a secret. Together, Valda and Larissa take a gamble in a game of cosmic Russian Roulette where the stakes are their lives and their adversary, Fate itself.

Can they beat Fate? Can freewill triumph?

Take a leisurely tours of the City State's night spots and its haute cuisine; rub shoulders with the beautiful and rich, but never forget that nagging question of destiny and the price you have to pay to change it.

How often do we put the events in our life down to fate; we were destined to meet, I was meant to get that job? How often do we read our horoscopes searching for the details of our future: today you will meet the man of your dreams; tomorrow you will finally make your fortune? But should fate be taking all the credit, or blame for everything in our lives or is it free will, our own choice, however influenced by our surroundings, which govern our actions? As an astrologer, my clients and their questions about their lives really got me thinking – astrology is all about freewill, encouraging clients to use the impetus the planets are giving them at any one time to make positive changes in their lives. However it seemed that most people almost wanted to believe that they had NO choice and that it was all written out for them and what they wanted me to do was just tell them how it would all work out, rather than what they needed to do to get the result they wanted. Astrology gives you the ingredients; you still have to 'make the cake yourself'. I hope that the storyline in A Sealed Fate will get people debating in their heads whether Lara's prediction became a self-fulfilling prophesy, whether Valda's choices alone determined her fate or if it all would have happened regardless of 'the reading.' A Sealed Fate will make readers think about how much we all put down to fate and how much we could change our lives by taking more control.

• Lisa Gordon tells the story at a cracking pace and it passes the time quite amiably. You get a real feel for the settings of Dubai, its exotic colour mixed with danger, which is interesting to read. — The Astrological Journal

• When I started this book it seemed to be light holiday reading but as I read on the suspense tightened and I found I was reading a really good thriller. — Richard Llwellyn of Api-uk.org

• 'Gordon painted a portrait of Valda, her lead character that captivated me from the start. Intense, adventurous, somewhat unsure of herself, yet seeking answers to inner questions, Valda set out on a journey that was packed with unknowns.'

• 'A Sealed Fate' is not my usual kind of read and so I didn't expect much, but I was surprised to be hooked from the first chapter and devoured the whole book in one sitting! — Amazon review

• 'I was impressed by the tightly plotted structure, unusual in a first novel, and even at the most shocking moment, everything still made sense.' — Amazon Reviewer.

• Most entertaining and well worth reading! It is well written and engaging, rushing you along with some surprises and twists which really keep you guessing until the last page! — Nina Lazarus, Esoteric Book Review

• This novel can offer sumptuous feast to the lovers of esoteric fiction. — Express Starteller

• Most entertaining and well worth reading! It is well written and engaging, rushing you along with some surprises and twists which really keep you guessing until the last page! — Nina Lazarus, Esoteric Book Review

"Valda is fleeing a broken life. On Table Mountain they took no notice of her scream of anguish but in the part of the Empty Quarter they call Dubai she finds it's just the same old game of promises, promises, the good-hearted and generous of spirit invited not so much into the parlour as the Bedouin tent, and finding herself in the clutches of a devious predator. Scheherazade had to spin endless tales to stay alive; Lisa Gordon's Valda has to feed a different habit and when the evil sheikh has had his fill of her she knows she will end up like her predecessors, buried under sands which consumed Ozymandias, the king of kings. It is then she has her chance meeting with Larissa. This practitioner of the ars mathematica damnabilis has a plan which might just enable Valda to escape her Arabian nightmare. These two women make a formidable team, each complementing the other's strength and weaknesses. Instead of tales they spin their web to lure the spider from his lair…

I like my heroine hot; I like her to be a goddess. I want to hold her metaphorically in my arms and whisper not sweet nothings but the Eleusinian, the Andanian, the Dionysian, all the chthonic mysteries. I want to hold her taut body and tell her it's no problem, it'll all be right on the Arabian night. Valda does that for me and there's the other thing about this book too: it reminds those who know it already and it tells all those poor s.ob's who don't that this ain't it babe, it's not all there is, there's more out there, this is just the beginning of the adventure. It makes you want to exult in the joy of the physical world whilst staring longingly at the curtain which marks the entrance to the next. Enjoy." [by Cule Hinder]

'A Sealed Fate' is not my usual kind of read and so I didn't expect much, but I was surprised to be hooked from the first chapter and devoured the whole book in one sitting!

I was impressed by the tightly plotted structure, unusual in a first novel, and even at the most shocking moment, everything still made sense. I have to be careful not to spoil the plot for other readers, but although I was completely surprised by the action of one character, I didn't have any trouble believing the event... the character was so fully rounded, and described so well in earlier chapters. I wonder if I would have been so shocked if a male character in a similar situation had done the same thing. Probably not, so I learned something about myself there!

Although the themes of the book are serious, Ms Gordon has a light touch and a rich vein of humour runs throughout. I laughed out loud on the train more than once. The story is thoroughly modern, but spiritual themes are woven into the plot and the motivations of the characters with a deft hand: a reader without an interest in these subjects would not be bored, but a reader with some knowledge might notice the cleverness of many little details in the writing... extra fun for me!

But the best thing about this book is the characters. The author understands so well how people hang together, how one thing in life relates to another, and how we tend to act in line with our personalities, no matter how perverse this may occasionally be! A real warmth shines through the writing... this author really cares about these characters and I really fell in love with the two main ones! I had a bit of a crush on the love interest too!

My one regret is that we did not get to find out more about Larissa's life beforehand, and I would love to know what happened next. I do hope that the author is planning a sequel, or even a prequel! [by Justine Clarice]

For everyone who believes in friendship at first sight, this book is a must read. The characters are well conceptualized and the author's knowledge of the settings, be it South Africa or even Dubai are excellent. I do believe settings also have a very important role to play in any novel.

Fate brings Valda, a singer - who has taken up a job in Dubai - to escape from a failed relationship and Larissa (Lara) - an astrologer who is perhaps searching for her own self, together. The client-astrologer relationship fades away in the very first meeting and a true, trusting friendship is born.

There are so many snippets of wisdom in this book. I quote two of my favourite paragraphs here:

In one scene, Lara tells Valda - Success is ephemeral and when it ceases to be, you cease to be with it. We are all more than our date of birth, our martial status, and our successes and failures. It's all ashes and dust, but the lessons we learn stay within our soul for eternity.

I've been a firm believer that we are in the driving seat of our life's chariot. True, unexpected painful things can happen. Not being able to find a soul mate, separation, illness, loss of a loved one, and so on. It is up to us how to handle such obstacles and overcome them, as we continue to drive on life's pathway. But then, does fate have a say in how things pan out? This is a question I've often asked myself and it was answered by Lara.

"When we can't decide or fail to choose, or if we believe we have no choice, fate chooses for us. I believe that we fail to decide or commit to something totally due to a battle raging between our conscious will and our spiritual will; this produces a frustrating stalement of depression and torment. We stumble along until our higher conscious and ego come into alignment, then anything is possible."

But, let me not digress. Valda is trapped in the web set down by a Sheikh who owns many hotels, including the one she works in as a singer. There is perhaps no escape. But then, Lara - comes to her rescue. While this Sheikh meets a justified end... the ending of the book is not perhaps what I had visualised.

Lara and Valda meet for one last time in New York, and Valda is eagerly anticipating a visit from Brett - perhaps this romance would blossom? There is an unexpected twist, even as both Lara and Valda are able to move on, albeit in different dimensional spheres (let me not say more, for this you have to read the book).

The last sentence in the novel, aptly is: The End, and The Beginning. [by Lubna]