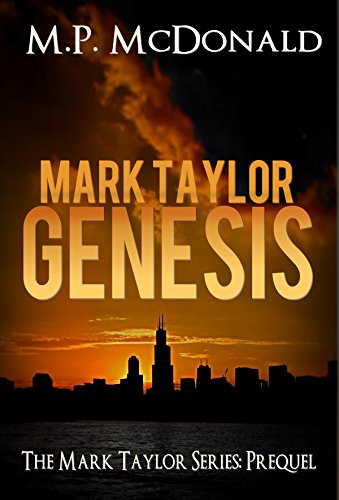 about this book: Mark Taylor: Genesis is about an ordinary man, a photographer, whose life is changed when he buys an old camera at a bazaar in Afghanistan. It has magical properties that give Mark the gift of being able to see a limited number of tragedies in the future-- one day in the future. When he realizes that he can change the outcomes, he does whatever he can to prevent the tragedies.

Mark Taylor: Genesis came about after I had written three books in the Mark Taylor Series. When I had written the first book for the series, No Good Deed, my goal was trade publishing. That meant I pretty much had to jump right into the story. When I queried the first version of the book, the little bit of feedback I received from agents highlighted the fact that it started too slowly, so I ditched any back story info. I later sprinkled it in without trying to be too heavy-handed with it. The revised version still didn't fare well with agents, so I self-published the book and couldn't be happier with the results.

Over the next 20 months, I added two more books to the series, March Into Hell, and Deeds of Mercy, both of which were also well received by readers. However, some readers wanted to know more about the early days when Mark used the camera. There is about a two year gap between when he bought it, and when No Good Deed takes place, due to No Good Deed having a real event at its core. I also wanted to see Mark as he was before he was put through the wringer when the camera created havoc in his life.

The hardest part of writing this book was the chapter where Mark is in Afghanistan. The time he was there was 1999, so the Taliban was in full control. I used books, internet articles, youtube (there were several videos from that time period, surprisingly) and some videos on websites that decried the violence against women. The videos had extreme graphic violence.

The book has been out only since 10/14, so right now, the main readers are people who have read the other three books, but I hope to have this book be the one to launch people into the series. Many readers of the other books have said in reviews and emails, that Mark Taylor was a character that they fell in love with.