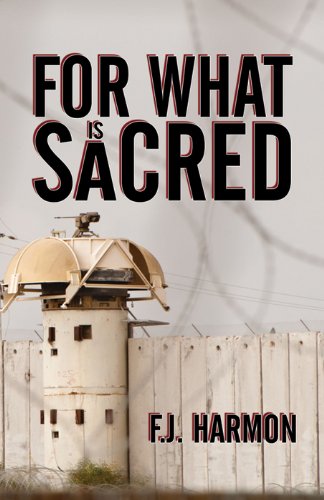 Book: For What Is Sacred by F.J. Harmon

about this book: "For What Is Sacred" was inspired by State of North Carolina Port Authority's interest in building a deep water port near Southport, North Carolina, locating it between a nuclear power plant and the largest ammunition dump on the east coast. From my previous work in the national intelligence environment I was aware of the deep connections of both Muslims and Jews with the land. The Zionist and other devout sects of the Jewish people want to re-establish the covenant and see the reclaiming of the Samaria and Judea districts, which comprise most of the West Bank, as essential to the its re-establishment. I believe this affinity for the land extends at some level to many Israelis if not the majority, and to all political philosophies, as evidenced by the near obsession with building new settlements on the West Bank. The Muslims on the other hand feel deep humiliation for their current state of life. Palestine at one time was the center of trade with both the East and West.

Of course it is not so today, but the feeling of the richness and power of that ancient time still influences their current day thinking. Many believe that all the lands they conquered is still theirs and that like some great thief, their lands have been stolen from them. So both peoples consider the land sacred and that is the source of their near constant strife, it is for what is sacred, hence the title of my book. However, men lusting for power or revenge understand these deep seated motivations and know how to manipulate them for their own ends. This then is the backstory environment that I drop the now free mastermind of the 911 attacks, a young man born in the United States of a Muslim father and Israeli mother, a young dedicated Israeli Mossad agent who is in love with the young man, and a crusty FBI agent irritated by the constant bickering in the Middle East.