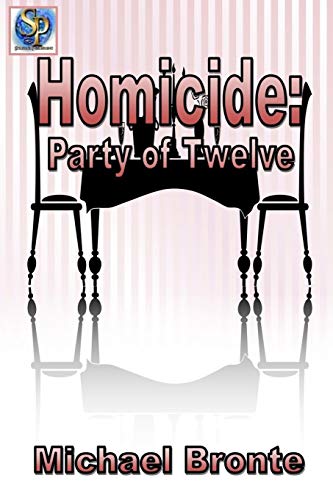 about this book: Heroes are just everyday people. None of us know what we're capable of until we're faced with circumstances where we have to rise above our everyday existence to meet physical or mental challenges we'd never dreamed of. Such is the situation with the main character in my book, Homicide: Party of Twelve.

Frankie Fortunato is a hard-working server working his way through law school. When his boss is gunned down in a drive-by outside Chez Alain, the Jersey City restaurant where Frankie Fortunato works as a server, Frankie takes over as manager. Reluctantly, he becomes an integral part of New Jersey State Police Detective Matt Klimecki's investigation aimed at bringing the criminals who perpetrated the crime to justice.

Frankie an everyday guy who is torn between being a reluctant hero, or walking away from a dangerous situation. It's his loyalty to his fellow workers that motivates him, and one of those fellow workers is the woman he's been falling in love with, Gabby D'Angelo.
The setting is inner-city, the scenes can be gritty, and some of the characters are unsavory. The mood is serious, and Frankie is constantly undergoing inner conflict over his decision to become part of the investigation. In the end, Frankie has no choice but to deal with these doubts.