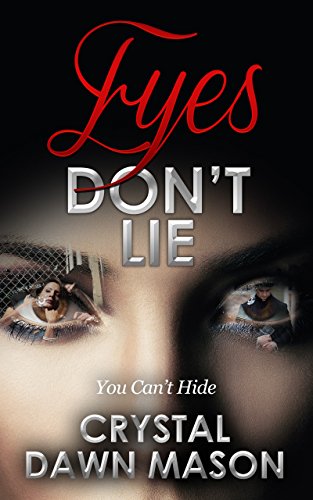 about this book: An experience I had as a teen inspired me to come up with the title Eyes Don't Lie. One of the scenes in the book is representative of my personal encounter. It's the scene involving McKenzie spending the night over to her friend's house, and she could discern that her dad was a rapist by looking in to his eyes. But because her spiritual gift was yet to be developed, she didn't recognize and/or understand what was going on and how God was working through her. At fifteen years old, I was McKenzie. I had spent the night over to a friend's house and I discerned the same evil by glancing in to her dad's eyes. Weeks later, I received confirmation when my friend passed me a note in class telling me her dad had been molesting her. Therefore, God had shown me what was real, and he confirmed it. It's an experience I will never forget because I could have been harmed had it not been for God's protection. Also, I would like to add how important it is to pay attention and work toward developing your gifts because not only are your gifts for your own benefit, but it is for the benefit of others. In this particular case, God used my gift to protect me from an evil spirit. Had I kept going over to her house and ignoring the warning, something bad might have happened. But that wasn't in the plan because my friend moved soon thereafter. In regard to using my gift to benefit others, I could have warned my peers about going over to her house. I could have reached out to the police. There are steps I could have taken to prevent her dad from harming others. Also, my experience is testimonial, and I know there are others who can relate to it along with the fictitious scenarios and characters I created in Eyes Don't Lie.

Eyes Don't Lie is a story that I believe is very much needed today because we live in a society where the majority focuses on the what instead of the why, which often times leads us to be judgmental and unforgiving of others. I thought it would be good to write a story where the reader feels compassion for the character instead of mere hatred, disgust, etc. And it's not to justify his behavior because what he does is wrong. However, we all have struggles and/or weaknesses that we have yet to overcome. And we want others to allow grace for us, but we often fall short of allowing grace for the sin and mistakes of others. And I believe it's important to take this in to account to keep from being hypocritical and self-righteous.

In my book, Keith is a murderer and a rapist, but he has a backstory that explains why he is the way he is. He was abused as a child, and he harbors a lot of resentment inside. He has a negative concept of himself because of the abuse, and he is being oppressed by a demon who constantly reminds him of the past so he'll remain bitter and unforgiving toward his mom. And it's the Devil's way of manipulating him in to believing his sinful actions are justified. As Keith encounters different women, he stumbles upon McKenzie, who is different from the rest. She's not his type, but because of her gift and her connection to him, she gets the wheel turning in another direction.