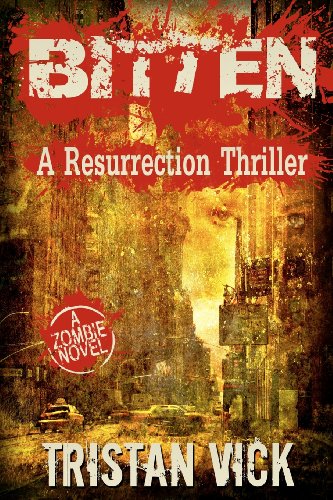 about this book: BITTEN: A Resurrection Thriller is a character driven survival horror story which takes place amid an outbreak of the living dead. Yes, it's a full length zombie novel!

Before you roll your eyes and say, "Not another zombie novel," I beg you to consider that this novel is about the human characters. Unlike many of the Indy published zombie fiction which is big on zombie mayhem but light on plot, BITTEN: A Resurrection Thriller is called a thriller because it's just that--a character piece in which interesting developments unfold, twists occur, and every single scene is thrilling. What's more, the book is genuinely chilling! My goal was to set out and write a piece which would unnerve people, get under their skin, and perhaps compel them to keep the light on as they read late into the night.

So what's the book about?

Rachael Ramirez, a divorce attorney and single mother, picks her son Hector up from school. Hector has come down with a horrendous fever, after a fellow classmate bit him on the arm. The television and radio is a buzz with dozens of biting incidents as it seems the denizens of New Castle City are getting bit. But when Rachael awakes the next morning, she find's her son Hector behind the kitchen counter eating their pet cat!

Alyssa Briggs is an animal veterinarian. She was one of the first to realize that the rabies-like virus was spreading to humans. After having survived several zombie attacks, she is now walking back into town to find someone who knows what is going on.

Jennifer Hurley and Jesse Zanato simply got caught in the wrong place at the wrong time. Stuck on the upper levels of a downtown high-rise building, they are trapped in a corner office with no where to run and nowhere to hide while a throng of zombies loiter outside the office doors.

Staff Sargent Jared Barnes and Sargent Ulysses S. Barnes are two Marines who are sent in to help evacuate the citizens of New Castle City as the military sets up a quarantine zone around the entire city.

General Greer is in charge of keeping the perimeter around New Castle City secure and screening anyone who comes through his checkpoint, as he tries to keep the plague in check. The only problem is, it's spreading to fast to contain. If the General's plate wasn't full enough, he gets thrown a curve ball when he discovers a mysterious survivor who seems to be immune to the zombie plague. But how? And what does this mean for the future of humanity?

BITTEN: A Resurrection Thriller follows all of these character's stories arcs with interest as their fates begin to intertwine.