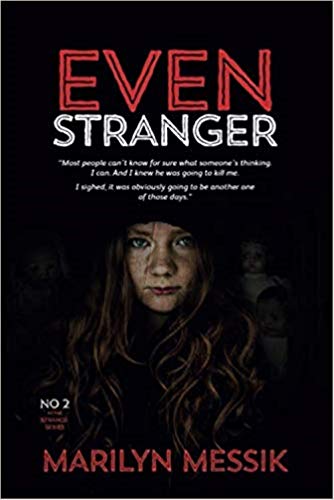 Book: Even Stranger (Strange Series Book 2) - A Roller-Coaster Of A Psi-Fi Thriller by Marilyn Messik

about this book: The second book in the Strange series follows Stella (telepath with attitude!)

as she makes her way in the working world, a journey not as smooth as she'd like and she's starting to think perhaps she's just not cut out to take instruction. There is one thing though of which she's positive, it's not that she can't handle sticky situations, of course she can, she just doesn't want to. No, without a shadow of a doubt, normal's going to be the name of the game from now on, she's determined!

As you can probably tell, Stella as a character tends to go her own way, and I simply have to write fast to catch her up! In the main it's a thoroughly enjoyable experience although, as with anything there are days that are productive and others that are spent just gazing vacantly into the middle distance.

Of course, the other factor that hinders progress is that whatever you write can always be improved, you can go over something a dozen times and still have a typo jump up and hit you in the face, or find a phrase that could be so much more elegant. But there has to be a point when you say, enough! Mind you, I've always felt Shakespeare, given a little more time for thought, would have given Romeo and Juliet a happy ending, thus ensuring generations of theatregoers would head home a lot less miserable.

Brief Excerpt from Even Stranger
"Our outing was complicated from the off. She tottered down the garden path, fell into the passenger seat, grabbed my hand in a vice-like grip and informed me I was a truly, truly wonderful person and she was beyond grateful, to have me in her life. It would appear the pills had come into play early. But a paying client's, a paying client and as she wouldn't let go my hand, we both put the car in gear and headed for Harley Street. She wasn't in a brilliant condition when she went into the surgery; even less so, when she emerged some forty minutes later, supported by the dentist and a nurse.

The former, propping her up while the nurse and I wrestled her into her coat, said he was surprised she was having this strong a reaction to what had only been a local anaesthetic. I wasn't. I imagined he'd had his back turned when she knocked back one or more of the pills, swigging them swiftly down with that pink rinsing-out stuff, so conveniently to hand.

Could I manage to get her home safely, he asked with concern, or should we wait until she was more herself? As I was unsure how many pills the wretched woman had hoovered up before she left home, let alone whilst in the chair, I'd no concept of when that might be. So, I said we'd be fine. I unwound her arm from around his neck, wound it around mine and we staggered, in some disarray, down the stone steps to where I'd mercifully secured a parking spot right outside the consulting rooms.

Thanks to her on-going diet, and my floating her an inch or so above the pavement, which I didn't think anyone would notice, I was able to load Laura safely, if unceremoniously into the back seat. Extracting her at the other end was simpler, because there weren't other people around and I just floated her up the garden path gently giggling – her, not me –securing her with one hand while I found the key and got her inside.

I planted her on a chair in the hall, thinking maybe a strong coffee could counteract whatever she'd taken, at which point I could leave with a clear conscience. With a quick glance to make sure she wasn't going to slide off the chair and break her neck, I headed for kitchen and a kettle, just as a man in a black balaclava, carrying a claw-headed hammer, emerged from the living room. Laura looked up and screamed and I reacted instinctively, flinging him to the other side of the hall." ~end excerpt.