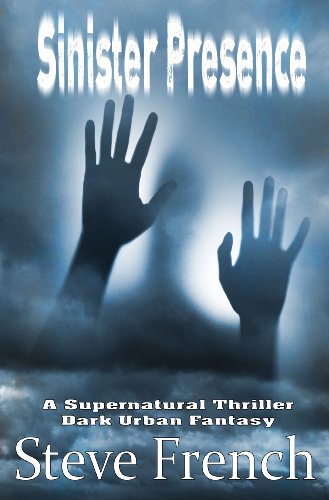 about this book: Imagine if you woke up in an eerie world where your worst fears become your reality. A place where empty city streets are haunted by shadowy nightmare creatures and an endless rain falls from the night sky. A twisted surreal world that exists just beyond the fabric of our own reality.

This is where Brent Griffis woke up recently, and he soon discovers that he may not be alone in this strange world when he receives an odd phone call from a mysterious woman claiming to be his estranged wife. Could she too be living somewhere in this dark realm?

The story began as a short novella loosely based on actual events that had been going on in my life during a mid-life crisis and perhaps part of a nervous breakdown. After reading the story, my sister suggested developing the work into a novel. We had already been working on and developing concepts concerning a underworld and the strange creatures that might populate it. We had come up with a number of characters which would eventually become the Savants and gods of this realm as well as the rules of the world and how they lived and what drove them. Combining the two aspects together created a new world with its own mini-mythology. We were inspired in many ways by Dante's Inferno and his conceptions of purgatory. What we wanted to do was to blend the aspects of his visions into a world, much like our own, but also perhaps both abandoned and haunted. The next step was to tie the short story into this world and make them work together. We revisited the characters I had already created for the original story and decided to expand upon them by associating them with archetype characters as are commonly used in storytelling.

During the writing and story development stages we were able to determine that our target audience would most likely be those interested in horror, but we also saw that the story was closer to being a supernatural thriller with strong aspects of dark urban fantasy since we were using creatures from mythology as inspirations for the monsters in our tale.

The title was conceived long before this story was even written. At the time I thought of it, I was debating writing a ghost story and needed a catchy name for it. I was simply trying to think of combining two words to describe something ominous and foreboding looming in the shadows. I needed something dark and evil. Sinister was a great word for something both dark and evil. For something foreboding and ominous, presence did the trick just fine, and thus Sinister Presence was born. When I began writing the short-story, it was no great task to find it a name, I already had one that was unused sitting on the back burner of my brain. When developing the book version of this story, I kept in mind that this sinister presence had to be present in every aspect of the story. The sinister presence had to be more than just a physical manifestation, it also had to be present in the characters psyches', emotions, feelings, and even their motives.

The cover-art had been long in the making. Originally, since the subtitle was 'the chair', the concept art revolved around the idea of using a picture of a chair in some sinister setting. Since a asylum was also part of the story, we had played with the idea of using a picture of a chair set in the shadows of some abandoned and run-down asylum. There was also an idea to use a picture of a tunnel leading through darkness with blood pouring down from the exit. Then one day, I was writing the chapter concerning the main character and his daughter walking through a park, and in my head I could see their shadows walking through the darkened mists. I wanted to see this scene clearer, so I went into photo-shop and whipped something up. Using a public domain picture of a road, two silhouettes, and a rain texture, I was able to create a concept piece for the chapter. My sister loved the picture and suggested we use it for the cover. I agreed, of course. She went back in, edited the picture for use as our official cover, and added her own touches to create the end result.

The hardest part of writing any story is editing, but avoiding distractions, finding solitude, and tackling the motivation can also all be challenges as well. I kind of write the way I sleep. I fight going to sleep like a two year old, but once asleep, I fight waking up like a teenager. It's the same for writing. I can find it hard, as Stephen King would say, to fall into the page, but once I am there I can find it extremely difficult to get back out. I'll write until sleepiness or necessity requires me to step away for a brief reprise.

Brianna and I did conduct research for this book. Mostly we looked into various concepts of purgatory, archetypal characters, mythology, occult religions, demonology, and symbolism. For the writing process we looked into book structure, formatting, story-boarding, and formula fiction.

We learned a lot of new things while writing this book. While we both have been writing fiction and non-fiction works over the years, we realized and agreed that we needed to brush up on our grammar and punctuation skills. We had our non-fiction guide published, and we had that fairly square, but publishing a fiction novel was new territory. We also learned about formatting for digital readers since we feel that digital publishing is the current trend in the market and expect the majority of our sales to come from those channels.

The underlying messages and symbolisms of Sinister Presence revolve around various human experiences and emotions. Mostly, the story is about guilt, despair, denial, blame, and tragedy.