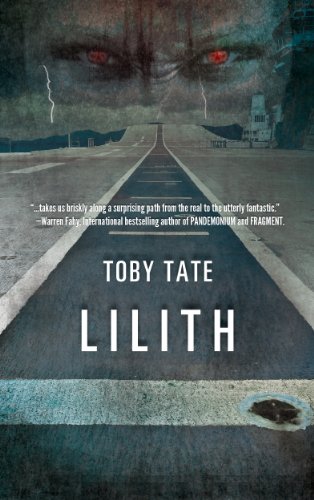 about this book: Ancient myth meets modern technology in LILITH, a thriller that begins aboard the newly commissioned USS Gerald R. Ford, and soon descends into the claustrophobic terror of New York City's dark, abandoned subway tunnels. Not for the faint of heart!

I always wanted to take something from ancient mythology and drop it into the middle of the ocean aboard a U.S. Navy aircraft carrier, just to see what would happen. What I came up with was LILITH, which I call a supernatural techno-thriller. It's a fun, scary book that also has a lot of human drama and shows the strength and fortitude of people that serve in the U.S. Navy and in the CIA.

It took about six months to write, after doing about six months of research! I had to contact several people that specialize in the latest in naval technology and aircraft carriers. I am ex-Navy, but never spent any time aboard a carrier. I also spent several days aboard the USS Harry S. Truman doing research. The title comes from the main antagonist, Lilith, although the original title had been CREATURE. Luckily, I listened to my wife and renamed it!

The amazing cover was done by a graphic artist named Stan Tremblay, who has done work for New York Times bestsellers and self-published authors alike. He worked closely with my editor at DarkFuse, and I love the way it turned out.

The toughest part about writing LILITH was keeping myself on a schedule of writing so many words per day while trying to work a full-time job and help my wife raise our daughter. I think a lot of authors can identify with that!

The biggest thing I learned from writing LILITH was how much it takes to put together a really entertaining book – keeping chapters short and ending them with cliff-hangers, making characters sound like real people and not all sound alike, getting to the action quickly, but also putting on the brakes at just the right time so the reader doesn't get overwhelmed – there's a lot to it. More than most people think.

I just hope that readers will take something away from the story, maybe have their world expanded just a little bit, and see some things differently than they did before. I think that's all any fiction writer can ask for.