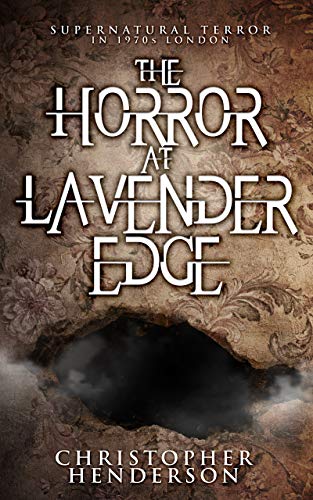 about this book: 'The Horror at Lavender Edge' is an old-school supernatural horror novel, set in 1970s London. I was born in south London at the beginning of the Seventies, and the world I remember was steeped in the eerie, the uncanny and the supernatural. The television airwaves were haunted by stories featuring stone circles, giant rats in Victorian sewers, and time detectives from another dimension. Library shelves teased lurid paperbacks that promised terrifying nightmares. Even the news seemed to be saturated with sober accounts of poltergeists, UFOs, and spectral encounters.

That environment clearly influenced me. I have spent much of the last quarter of a century writing non-fiction, mainly related to real-life 'paranormal' experiences. Recently, however, I adopted a pen name and returned to what I originally wanted to create as an author: horror fiction. Writing this novel was a way for me not only to do that, but also to revisit the terrain of my childhood imagination, and play there once again – this time as an adult.

'The Horror at Lavender Edge' is told from the points of view of two main characters. Harry Undine is 30 years old and wishes he exuded the effortless macho cool of the Rat Pack idols he hero-worshipped in his youth. Unfortunately, Undine has a sixth sense: an unwanted psychic ability that makes him vulnerable to the powerful echoes that people call ghosts. Encountering one of these echoes, experiencing the residue of somebody else's pain, plays havoc with his emotional state, and the effects embarrass him so much he keeps his ability a closely guarded secret. Despite the potential danger to him, Undine is a member of a team of paranormal researchers working for the Corsi Institute in London, where he hopes eventually to find a way to manage or, even better, get rid of, his ability.

Arriving back at their central office after an investigation, the Institute team is approached by the second main character, a 25-year-old woman named Jo Cross. Jo tells them she is a police constable, and that she needs them to help an elderly woman who is terrified by the strange goings-on inside her house: an old building called 'Lavender Edge' in Mitcham, out in the far southern regions of Greater London.

From their first meeting, Undine's sixth sense screams at him not to get involved. He does not know what's wrong, only that in some way WPC Cross represents terrible danger. But despite his efforts to discourage his colleagues, their boss is convinced they should help, and Undine (unwilling to reveal his secret and admit why he is scared) has little choice but to go with them.

They soon come to realize that this is no ordinary haunting, and that a powerful and dangerous supernatural force is stirring.