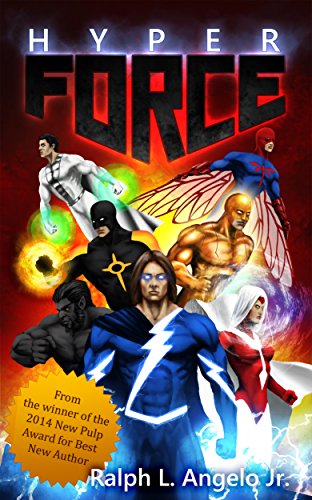 about this book: A small spacecraft crash-lands in Northern New Jersey and a new age of heroes begins on Earth! The young alien prince aboard the ship was fleeing an evil general bent on killing the young heir to the throne, but what the alien general did not count on was the gathering of heroes that would occur because of his attack. The heroes that would become known as 'Hyperforce' drove off General Zaring and his robot forces from northern New Jersey.

But this was not the end of their adventures together, it was just the beginning.

The young team would face many more trials and tribulations over the coming months against one dire threat after another. Aliens and monsters as well a megalomaniacal villains bent on world domination, destruction or just causing as much pain and suffering as possible. Against them all, Hyperforce will stand fast and fight them all to the finish. But whose finish will it be? Find out within the pages of 'Hyperforce' By the winner of the 2014 New Pulp Award, Ralph L. Angelo Jr.