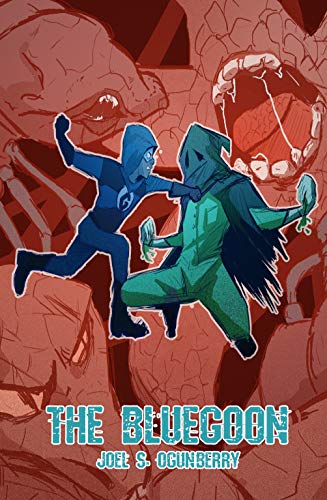 about this book: The Blue Goon tells the story of Shaun Chanter, a fifteen year-old-boy struggling through high school to get his grades up, make friends and get his crush to like him. But he also has to make a living working an after-school job to pay his rent.

Shaun also lives in a world where knowledge of supernatural elements: aliens, monsters, mythical creatures and superpowered humans exist freely in the open, and one night, after coming home from work, Shaun discovers something that would make him apart of the supernatural world forever.

He discovers a kerubix; one of thousands of alien cubes that landed on earth decades ago, capable of infusing humans and animals alike with enhanced qualities that gives them superpowers. With this augmentation, Shaun decides to help fight the vicious monsters and supervillains plaguing his town, but has to develop new ways of keeping his identity a secret from those around him.

However, Shaun will soon learn that his greatest challenge is not fighting monsters or doing homework, but discovering what attributes he will have to adopt that will make him a better person for the rest of his life.

This combines the elements of Saturday morning cartoons into a episodic writing style for each chapter. The book also focuses on themes of coming-of-age, self-improvement and high school development all intricately woven and told sparing through the narrative, while still being what it is intended to be: a fun and exciting story filled with heart, action and adventure.