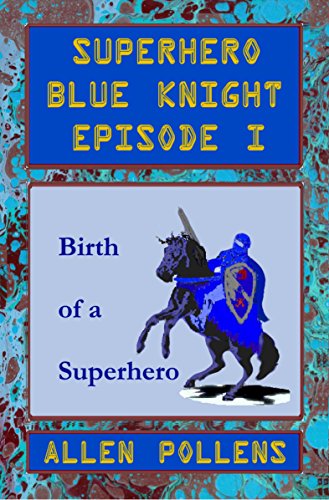 about this book: Chicago Births a Superhero Dedicated to "The Protection of Mankind, Upholding Honor and Justice, and Vanquishing Evil in All Its Forms and Wherever Found."

Superheroes capture our imaginations. Superheroes inspire a purity of beliefs in positive, self-effacing conduct. Superheroes simplify the distinction between good and bad, even when circumstances are complicated. Author Allen Pollens creation of Superhero Blue Knight is a response to our adoration of the "knights of old."

Beaverton, OR – October 1, 2017: Created by a wizard, Blue Knight has the appearance of a knight of old. However, every aspect of the Blue Knight's being and his steed, Black, contribute to his super powers. The excitement of Blue Knight's exploits as he goes forward according to his vows of conduct is heightened by the unusual and wily opponents that test him. Yet beneath it all, there is still Roger, the human side of Blue Knight, who grows from the simple young man off the farm into a principled adult with strong feelings for the people around him.

In this initial episode, readers are treated to the Superhero origin story and, while each episode stands on its own, Roger/Blue Knight evolves with the new challenge each adventure presents. The importance of relationships he forms with the people at Rosie's Rooming House becomes increasingly clear, when he is captured and held prisoner by an adversary, The Artiste.

Each episode is unique in the story it tells, and what it adds to our understanding of Roger and Blue Knight. The ongoing characters evolve with each new story. There are currently eight episodes. Readers may want more and, if they do, author Allen Pollens promises sequels with more Blue Knight adventures.

"SUPERHERO Blue Knight Episode I– Birth of a Superhero" is available at Amazon.com in both paperback ($5.99) and for Kindle ($2.99). It runs more than 14,000 words, 70 pages and presents 16 pictures (in color in the Kindle edition). Check it out at Amazon.com via this link: http://tinyurl.com/y7qxzoem
About the Author:

Allen Pollens has always had two personas. There is the tinkerer who always wanted to know, "How does it work?" That one became a graduate engineer and led a high-tech work life for more than forty years. Then there is storyteller Allen Pollens, who was spinning tales from the time he was a child. In addition to the "SUPERHERO" episodes, he has published more than twelve books. All available at Amazon.com.