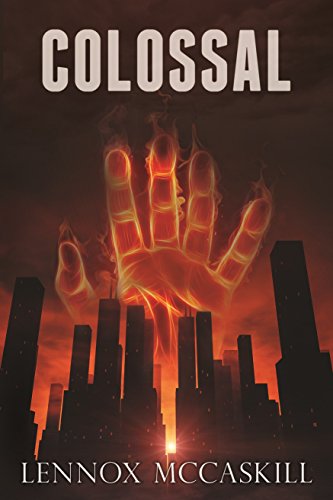 about this book: "Colossal" is a sci-fi mystery that revolves around the separate journeys of three characters that are unknowingly connected by a singular event. Readers will be swiftly inserted into a crime scene with a very bizarre trail of evidence that will lead to an even stranger suspect. As the story progresses, the vibrant characters in "Colossal" unravel something much larger than any of them originally suspected.

Though it was published in 2015, Lennox McCaskill began writing this book in 2008. The events of "Colossal" take place against the backdrop of the "Great Recession" that hit the U.S. at that time and a number of historical references and issues find their way into the lives of the main characters. "Colossal" also incorporates a number of elements from the author's life, such as his experiences working in TV and radio. In fact, the story opens with a series of news blurbs to set the scene.

The original idea for "Colossal" came in the form of comic drawings. Lennox, who is a huge fan of the superhero genre, created comics featuring some of the early versions of the characters and sent them to a friend that had recently moved to a new place. Eventually, Lennox would recite the stories to his future wife. She convinced him to write a book with the characters, but Lennox didn't want to lose the comic book feel. That's one of the reasons why the subtitle of "Colossal" is "Issue #1".

One of the joys of writing "Colossal" was the fact that a number of the characters inherited traits and mannerisms from the people in Lennox's life.

"Colossal" is the first part of "The Colossal Series". The second part, "Afflictions" was published in August of 2016.