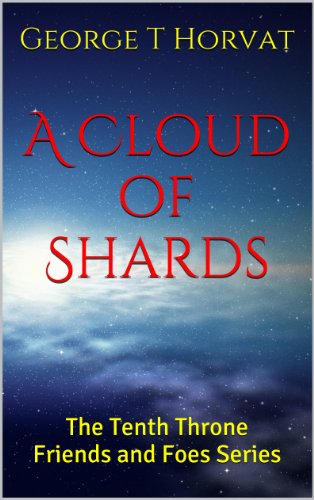 Book: A Cloud of Shards - The Tenth Throne Friends and Foes Series by George T. Horvat

about this book: This story is the second in the "Friends and Foes" series that started with a story titled "The Littlest Sound." In this first story a new superhero is created as the story ends. "The Littlest Sound" is written to appeal to young children for the most part but with "A Cloud of Shards" the series gets elevated into a more adult theme and the newly created superhero becomes the main character. In this series the existence of a Omnipotent Creator is acknowledged and the higher lifeforms of his creation are in constant turmoil due to the rebellious nature of some as opposed to the loyalty of others. This will be the primary theme throughout this series with the third story "Adam's Remorse" picking up where "A cloud of Shards" leaves off, just as "A Cloud of Shards" picked up where "The Littlest Sound" left off. God willing; if I live long enough; this series is destined to encompass twenty five novels.

A cloud of Shards

Upon their transformation, both Sah-oond and Ly-tee as they are now known, were given one of the most revered duties in the domain of The Creator. They were to stand guard at the golden gate at the junction where the pool of living water empties into the river of life.

However, because they are not ordinary Cherubs with fixed attributes, The Creator could shape and mold them as he pleased if ever the need should arise. This flexibility saved the Creator the trouble of creating more Cherubs designed specifically to deal with unexpected problems. In reality Cherubs are the warrior class of Angels and are second in rank only to the Seraphim.

In the sector of the universe that was under the rule of The Tenth Throne known as Naphtali, just such an unexpected problem arose and the two of them would be called upon to investigate the mysterious incursion of the forces of the evil seed onto a planet known as Sharr. Despite what seemed to be an impenetrable shield put in place by The Creator to protect the people who dwelt on that planet, they were invaded and were on the verge of absolute control by Satan, whom they called The Sharr-Bolee. At this point in time The Creator was considering total destruction of the wayward people of Sharr.

The Creator decided to give the two Cherubs extraordinary power and transformed the two of them into one. He would be known as Sah-Tee and would become the most powerful Cherub in all of creation. However, because he needed to find out the secret of how The Sharr-Bolee broke through the shield around the planet Sharr, he would have to accomplish his mission as a mortal. He was given a crystal vial that contained living water. With the contents of this vial he would be able to revert back and forth from Angel to human and also use it to bring the dead back to life or destroy evil.

Upon his arrival on Sharr he chanced upon one of the few families left that still honored The Creator and befriended them. They were the Doo family and with their help he started his quest.

Dooley Doo would initiate his encounters with the evil seed and he would learn of Gillbarr who was a great warrior that had been put to death in The Valley of Dry Bones because he was the leader of the resistance. Sah-Tee would go to The Valley of Dry Bones and bring Gillbarr back to life with the living water and they would team up to find the secret of the deception.

With Gillbarr's help he eventually discovers the secret of the deception and brings the information back to The Creator. The Creator then sends him back to Sharr to free the people from the control of The Sharr-Bolee after reinforcing the shield around the sector of Naphtali to ensure that the evil forces on Sharr were isolated.

Upon his return to Sharr as a mortal he is ambushed by the forces of The Sharr-Bolee and is captured. Just when all seems to be lost, Gillbarr rescues him and the two of them set out to destroy the forces of The Sharr-Bolee. They start by first rescuing the Doo family who were being persecuted because of their connection to Sah-Tee, by the wicked Muucs who was the local enforcer of The Sharr-Bolee. They would then rescue Jillian who was the wife of Gillbarr before setting out for the great plain of Wakeenaw where the final battle would take place.