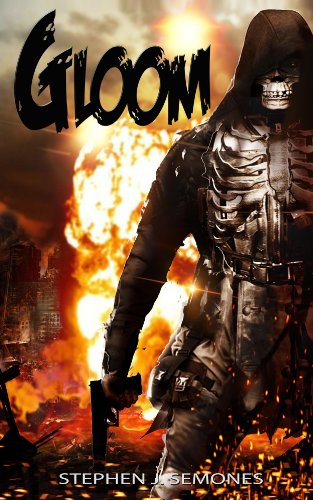 about this book: My wife suggested I come up with my own superhero. As an avid fan of comic books, as well as working with an Australian company Trinity Comics on their superhero The Wraith, she felt it would be a natural progression.

Being an author, it's hard to develop a superhero character outside of the comic format. Without the artwork, how do you tell your story properly? With GLOOM I set out to do just that. I wanted to tell the story of a hero, telling more than I could in a twenty-two page comic book.

Gloom basically tells the story of a man, Brock Ellison, who grew up in less than favorable conditions in Detroit, Michigan. A constant victim of neglect, Brock decided early on to make the best of his situation and leave. After a stint in the Marines, he finds himself back in Detroit, a city now overrun with even more crime, drugs, and violence. A crime-lord, Frank Sorino, has bought most of the city and is controlling most of the police and politicians. Brock, after nearly getting killed, decides to don the moniker of Gloom and sets out to rid the city of Sorino and his corrupt empire.

I grounded this hero's tale in real life, giving him no superpowers and an actual city as the setting. Essentially it's a hero's tale, one where a common man must rise against the evil empire, offering his city hope. Gloom is a vigilante, a man forced to become the violence he's vowed to stop. He's fallible, making mistakes along his journey. His struggle is a metaphor of our own, an uphill battle we all face on a daily basis.

I hope you enjoy the book and the origin of my hero, Gloom. Above all, I hope it gives you hope with whatever struggle or battle you happen to be facing.