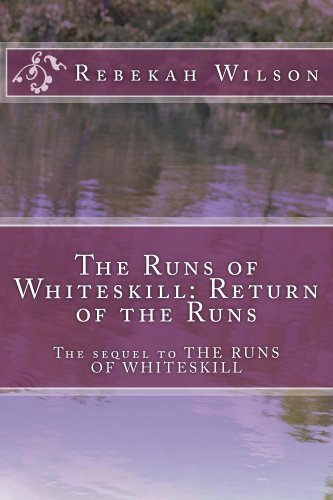 Book: The Runs of Whiteskill - Return of the Runs by Rebekah Wilson

about this book: Rebekah Wilson, author of THE RUNS OF WHITESKILL, welcomes you back to Palace Shore Drama Camp in RETURN OF THE RUNS. Ace Whibley returns to Palace Shore Drama Camp upon graduation from high school to serve as a counselor to help him get some real-world work experience before he ships off to University of Los Angeles to study acting. During his eight-week stint as a camp counselor, he gets a call from his world-famous grandfather George Whibley to guest-star on his album upon arrival in Los Angeles, which Ace gladly accepts. With him at Palace Shore Drama Camp is his beautiful, popular younger sister Olive, who becomes a victim of a camp crime initiated by one of Ace's fellow counselors but finds summer love in the process with another young camper named Santos Rodriguez, whose crush on her grows throughout his appearance in the novel.

The sequel did not take as long for me to write as THE RUNS OF WHITESKILL did. It took between 6 months to a year to write this piece, as I had several different ideas running through my head as I contemplated the sequel. At one point I had contemplated a spinoff or two with a completely different concept away from the beloved Palace Shore Drama Camp I'd greatly enjoyed developing as a story setting. The readers who read THE RUNS OF WHITESKILL and enjoyed it will also enjoy RETURN OF THE RUNS, as many of the same characters in THE RUNS OF WHITESKILL make appearances in RETURN OF THE RUNS. Research was done via Google (again), especially for the pop-culture references, some of which are based on some of my own knowledge of the pop-culture reference featured. RETURN OF THE RUNS is a play on the original title to emphasize the point of the sequel, although it doesn't hint as greatly at a prank as the first book title did. (There are myriad pranks in this piece, so those who enjoy playing pranks will also greatly enjoy this story.) I again appreciate my readers' readership, and I hope they will enjoy my work as much as I've enjoyed writing it.