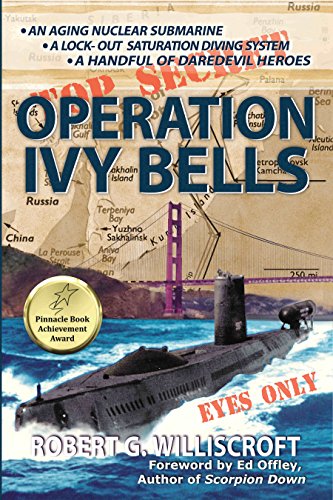 about this book: Inspiration for the Novel "Operation Ivy Bells"

When the Cold War was raging in the early 1960s, a real-life navy officer was fishing with his son on Chesapeake Bay when he saw a sign on the shore that read "Underwater cable – Do Not Anchor Here!" That sparked a germ of an idea that he pursued up the real Navy chain-of-command for the next several months. What if we locked divers out of a submarine on the bottom of the Sea of Okhotsk at the location of a Soviet underwater communications cable? What if they were able to tap into the cable? What kind of intelligence would we reap from such a venture?

It turned out that the Navy actually had the capability to do this, but did not have the required infrastructure. This real project was so secret that virtually nobody knew about it. We built a working cover consisting of two Deep Submersible Rescue Submarines, two catamaran mother ships each having two saturation diving systems, a fly-away system capable of carrying a DSRV to any world-wide destination, and several nuclear submarines that could transport a DSRV to a downed submarine. The entire real-world system worked. Actually, however, it was a cover so that several specially modified nuclear submarines could put to sea with what looked like a DSRV mounted astern. The fake DSRV actually was a lockout saturation diving system that could put divers on the ocean bottom to a depth of 1,000 ft for the express purpose of tapping into a Soviet underwater communication cable, and as a side benefit, to retrieve missile parts from spent Soviet missiles that splashed into the northern Sea of Okhotsk. This highly secret, real-world project's fanciful name was Operation Ivy Bells. I entered the project as the Officer-in-Charge of one of the diving teams that participated in Operation Ivy Bells.

Drawing on my personal experiences and the people with whom I worked every day as part of the real-world Operation Ivy Bells, I wrote "Operation Ivy Bells" (the novel) as a first-person narrative by J.R. "Mac" McDowell, the Officer-in-Charge of the diving team on the mission. It accurately captures their training, life on a nuclear submarine during the Cold War, and the experience of diving to unimaginable depths exposed directly to the extreme pressure and frigid temperature at the bottom of the Sea of Okhotsk. "Operation Ivy Bells" brings the reader into direct contact with the dare-devil heroes who played a significant role in bringing the Cold War to a successful end.

"Operation Ivy Bells" has received accolades from military leaders, from men who actually participated in this operation, from submariners and sailors across the world, and even from fans of Tom Clancy and Clive Cussler. It is an action-filled adventure based on true events that will keep you on the edge of your seat from the first page till the last.

Video 1: Dr. Robert Williscroft describes his life of adventure, and relates a couple of specific stories of high adventure and near death
Video 2: Hard Sci Fi author, adventurer, and all around fun guy, Dr. Williscroft comes back on Writer Groupie to chat about his work 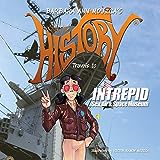