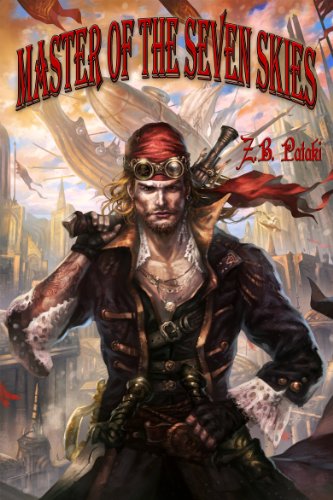 Book: Master of the Seven Skies by Balázs Pataki

about this book: Did steampunk run out of steam? Is it now all about octopus memes and brass keyboards? Tired of goody-two-shoes saving the world? Bored of Mary Sues' dreams about promenading in corsets never spoiled by engine oil? Would you like to have at last a villain to root for? If you're into the savage side of steampunk, you will enjoy Master of the Seven Skies.

In the dead of a Boston winter, as the world approaches its twentieth century, rich heiress Abigail Wigglesworth is mesmerized by her newest possession, the diminutive Captain Montenegro. Recently purchased from a traveling freak show, Montenegro regales her with astonishing tales of his glorious exploits—and the terrible misdeeds for which a curse had turned him into his much reduced state. Once a shepherd boy pressed into serving the mighty British Empire, he proved his mettle only to be betrayed by the man destined to be his lifelong nemesis. Yet it was behind iron bars, framed and imprisoned for imaginary crimes, that Montenegro discovered his true calling—as a pirate destined to prowl the skies for blood and plunder. But piratical glory must come at a high price, as the winds of fate carried Montenegro from Africa to Shangri La and the dungeons of British India… and eventually to Boston where his ultimate battle is still to be waged. Abigail, a damsel definitely not in distress, is eventually forced to decide about Montenegro's fate, and her decision will not only determine the pirate's fate but her own as well.

Video: Master of the Seven Skies - a book that takes steampunk into more savage and adventurous grounds than ever before