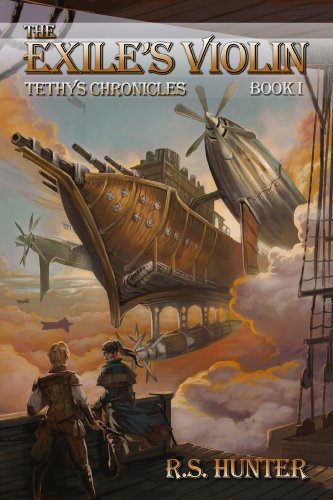 about this book: Who says that steampunk has to take place in an alternate Victorian Britain? I don't! Come explore the world of Tethys in The Exile's Violin, a steampunk fantasy novel full of airships, gunfights, ancient magic, and a young woman out for revenge.

The question of who killed her parents and stole an antique key from her father's corpse haunts Jacquie Renairre for years. Not even an assignment from one of the Prime Minister's advisors to investigate a conspiracy to start a war can distract her from her search for answers.

With new partner socialite Clay Bane port at her side, Jacquie races against time to figure out how the coming war, the stolen key, and an ancient legend are connected. The fates of her country and possibly all of Tethys hinge on her ability to unravel both mysteries before it's too late.

The Exile's Violin is Book I in the steampunk-inspired Tethys Chronicles. Book II, Terraviathan, will be available late 2013 from Hydra Publications.