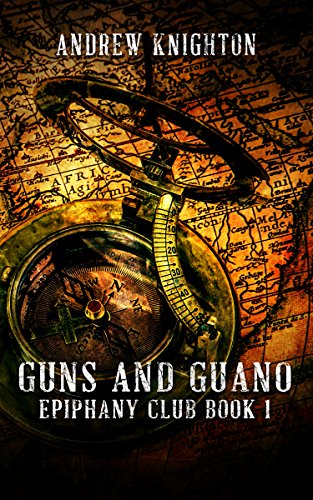 about this book: Victorian adventurer Dirk Dynamo is a man on a mission, determined to find the ancient Library of Alexandria and reveal its secrets. But the clue he needs is lost off the island of Hakon, a British colony where not everything is as it seems. There are monsters in the jungle, secret meetings under starlight, and strange machines in the governor's mansion. That's not even counting the ninjas.

Supported by mysterious socialite Isabelle McNair and absent-minded inventor Sir Timothy Blaze-Simms, Dirk hunts for the next piece of the puzzle. Can Dirk and his friends find the clue they need before they meet a deadly fate? And can they uncover Hakon's secret before it destroys them?

• 'It is a real treat to be propelled through an exciting story, a "ripping yarn", while sometimes being caused to pause in admiration over a very well-chosen word or turn of phrase, or a particularly striking image.'

• 'Knighton works hard to make sure to be serious about things that really should be taken seriously, even as he writes wacky, sometimes silly, adventure stories.'

This book is the first in the Epiphany Club series. It was inspired by my love of steampunk and rousing adventure stories. I love these fun rollercoaster rides, but they often gloss over the darker side of the Victorian era. I wanted to write a story that had all the fun of those adventures while acknowledging the strangeness and inequalities of a difficult period in history. It's steampunk adventure with a social conscience.

And ninjas. Plenty of ninjas.

Other books by Andrew Knighton