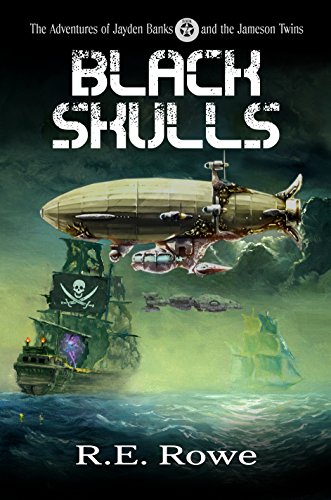 Book: Black Skulls (The Adventures of Jayden Banks and the Jameson Twins Book 2) by R.E. Rowe

about this book: Black Skulls is book 2 in the Jayden Banks and the Jameson Twins adventure series. A dynamic steampunk, sci-fi western adventure with pirates in battleships that can fly. Best described as "Back to the Future meets Wizard of Oz."

When Spring Tide Masons Jayden, Parker, and Nora are asked by Emperor Ruchbah9 from Andromeda to destroy a growing space anomaly that is threatening to obliterate their universe, they are teleported to a parallel-dimension universe with an alternate history of Earth. The trio find themselves on a strange present-day version of Earth at a place called Lake Tahoe. In this alternative history parallel-dimension universe, the California and Nevada territories are at war with convicted pirate descendants who have been repressed and forced to live in a resource-depleted territory of Lake Tahoe.

The three Spring Tide Masons must first find each other, then solve difficult clues to locate special gemstones and activate a steampunk transporter machine hidden in Black Skull territory that can send them back to their universe. With a crooked lawman named Double Jack on their trail and a mysterious energy being trying to help them, the three are nearly out of time. If they end up stuck in the middle of the Black Skull war, if they are caught and thrown into jail by Double Jack, or if the Ga find them, they won't return home in time and the anomaly will destroy their home universe along with everyone they know.

Can they solve the clues, activate the machine, and get back home in time to stop the anomaly? Will Jayden Banks find out why the energy beings have taken an interest in him? Will our three heroes survive to experience a new adventure in a book 3? Let's find out. Game On!