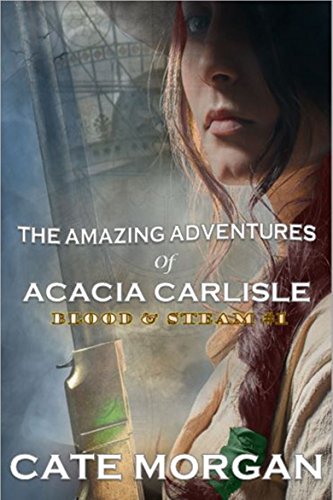 about this book: It doesn't happen often that a book more or less writes itself, but this one pretty much did just that. I had so much fun, I didn't want to stop! And, like many fans of Firefly who long for the return of their favorite characters (*waves at fellow Browncoats*), I turned to Steampunk inspired by the show to alleviate a little of my cancelled-show angst.

I ended up with high adventure, krakens, and a great deal of mayhem. I hope readers find it as much fun to read as I did writing it.

Acacia Carlisle's brother goes missing in the employ of an East India Trade Co magnate. Then her father, an infamous airship captain, goes down in pursuit. Now it's up to Acacia to rescue her brother, no matter what it takes, or costs.

She persuades down-on-his-luck Captain Drew McCallan to take her to Skyhaven on the first leg of her journey. It is Drew who gives her the bad news--that Baron Lindsey, in whose employ her brother disappeared, is actually in the slave trade. Her brother, it seems, may be in more danger than she suspected.

Drew has his own score to settle with Baron Lindsey. But little do they know that the Baron's setting a trap for Acacia even she might not be able to escape.