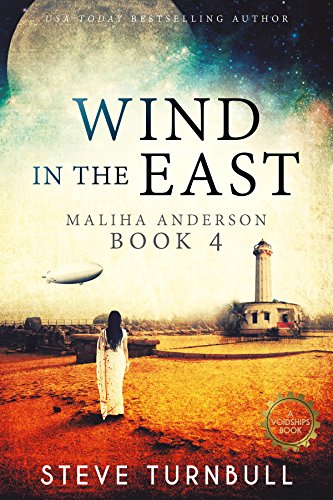 Book: Wind in the East - An Indian Steampunk Novel in a Fantasy Alternate History (Maliha Anderson Book 4) by Steve Turnbull

about this book: So here I was at the fourth book in the Maliha Anderson series of books and I decided that it needed to be a full length novel, as opposed to the novellas I'd written up to that point.

And then there was the fact that, although I was writing steampunk murder mysteries, my readers were becoming very engaged with the characters. Extremely engaged.

So I had to write something that satisfied the requirements of a murder mystery, steampunk, and the expectations of my readers. Well, considering the kind of responses I've been getting, I think I succeeded:

• "This longer book was darker than the previous ones but did not disappoint. Once again I was captivated by the adventures of Miss Anderson."

• "The climactic [redacted] scene was heart-rending, because I understood why Maliha would do such a frightening thing."

• "To me, Valentine is the stand-out character; rich and deep with believable conflict."

Of course that makes the next one even harder...