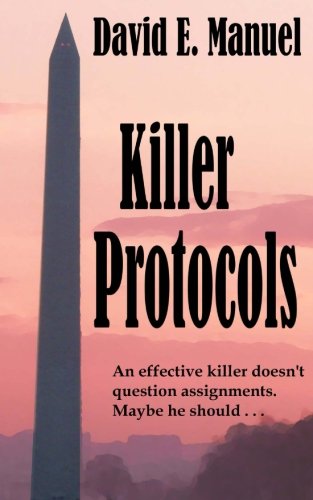 about this book: Ready for something a bit different? How about a slightly off-kilter thriller? Killer Protocols introduces Richard Paladin, a hit-man who works for the U.S. Government's Environmental Protection Agency. Of course, when he hired on, his boss explained that the EPA is just cover for his work eliminating terrorists, spies, and other enemies of the United States. Except he doesn't seem to kill many spies or terrorists. And when one of his "clients" turns out to be a rather innocuous Missouri housewife, then he's ordered to eliminate a bar-owner who moonlights as an environmental activist, Paladin starts to ask himself a few questions—like what all this has to do with the U.S. Government's refusal to sign the Kyoto Protocol. But Paladin likes his job, and if he can run the gauntlet of goons and thugs who keep cropping up, he can keep doing what he loves—arranging fatal accidents and suicides.

Killer Protocols is the first in a series of thrillers about Richard Paladin, America's top Environmental Protection Agent. Look for the sequel, Clean Coal Killers, in Summer 2012.