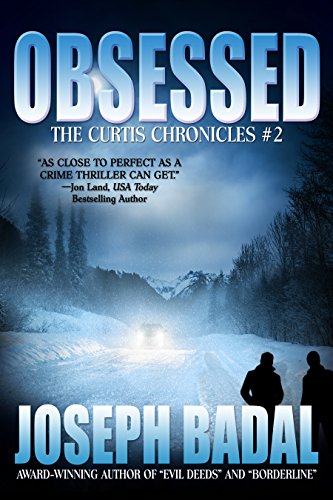 about this book: Obsessed is a thriller that, at its core, is about the struggle between good and evil. It brings back the protagonist, Matt & Renee Curtis, and the antagonist, Lonnie Jackson, who were first introduced to readers in The Motive, the first in the Cycle of Violence series. Matt & Renee lead hard-working, productive lives, but come into conflict with Jackson, a super-villain, who blames them for the deaths of his mother and brother, which occurred in the first book in the series.

For readers who love action and suspense without gratuitous violence, Obsessed is the perfect thriller. Unlike most thriller series, which present a protagonist pitted against a new antagonist in each book, the Cycle of Violence series matches the same protagonist and antagonist throughout. This allows the reader to delve into the characters of both the good and bad guys in a more profound manner as the series develops.

The Cycle of Violence series--particularly the first book in the series, The Motive-- is based on actual events that were related to me by a friend after his sister died in Honolulu. I was so taken with the characters in the first book that I decided to keep both the protagonists and antagonist alive in subsequent books.

The primary readers of Obsessed will come from the same demographic of all of my novels. They are discerning readers of action and suspense, who like a well-written, well-edited novel based on the struggle between good and evil.

Because I wanted to accurately portray the actual locations mentioned in all the books in the series, I took the time to visit Hawaii (The Motive) and Rio de Janeiro (Obsessed). This on-location research took considerable time, which made for a longer writing time than with my other books. The first draft of Obsessed took eight months, and the subsequent seven re-writes took another five months.

"Obsessed" is tied to the obsession that the antagonist, Lonnie Jackson, has with the protagonists, Matt & Renee Curtis. His all encompassing obsession is to make Matt & Renee suffer for Jackson's loss of his mother and brother. His obsession is irrational, but the driving force for his actions.

One of the most intense scenes in Obsessed takes place on a secluded road in rural New Mexico during a violent snow storm. The cover of Obsessed portrays the scene of a confrontation between the antagonist and protagonists.

The most difficult part of writing Obsessed had to do with the research around Lonnie Jackson's criminal enterprises. I did a great deal of research into human trafficking and was repelled and appalled by the activities of those in the human trafficking trade.

I did extensive research in writing Obsessed. In addition to researching the human trafficking trade, I also traveled to Hawaii and Brazil to make location descriptions as realistic as possible.

As with all of my books, my theme in Obsessed is essentially about the triumph of good over evil and how an everyday person can, with character and courage, become and everyday hero.