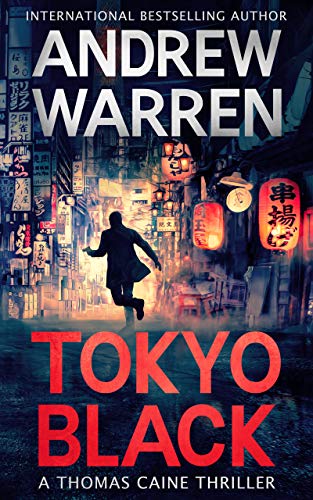 about this book: A burned spy must stop a deadly cult from igniting global conflict.

Thomas Caine lives in the shadows. Betrayed and left for dead, he has put his past as a CIA assassin behind him. Now he lives off the grid, and hides from his dark past in the seedy underworld of Pattaya, Thailand.

But when local gangsters set him up for a crime he didn't commit, he finds himself back in the clutches of the CIA. His old masters make him an offer he can't refuse: rot in a hellish Thai prison, or accept a dangerous mission in Tokyo, Japan.

As he hunts the neon-lit city for a CIA asset's missing daughter, he quickly learns there is more to this assignment than meets the eye. Yakuza thugs, Japan's Security Bureau, and even rogue CIA operatives all stand between him and his objective.

And looming in the shadows is Tokyo Black; a right wing terrorist cult, whose members demonstrate their loyalty by burning their yakuza tattoos from their skin. Can Thomas Caine defeat this fanatical enemy, before they ignite an international conflict that kills thousands?

Tokyo Black is a high-octane thrill-ride filled with gun battles, car chases, fascinating characters and exotic locations. Reviews say "Up there with Lee Child and Vince Flynn, A heart stopping roller-coaster ride, Everything you want in a spy thriller!"

I wrote Tokyo Black before Devil's Due, but they were published in the opposite order. A few years ago I took a trip to Japan, and it was a huge source of inspiration for me. There are some locations and characters in the story that I pulled directly from my experiences there. In Tokyo Black, Caine interacts with some yakuza gangsters that use a koi farm as their base of operations. I wandered into that location one night, just walking around the city. It was exactly as I described it in the book, right down to the old man singing to the koi. I didn't really see any yakuza there, but just the image of those plastic kiddie pools filled with beautiful fish stuck with me over the years.

I am about halfway through writing the next Thomas Caine thriller, and I can't wait to reveal the cover and title to readers later this month...