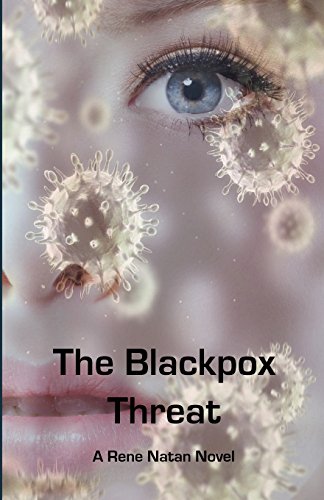 about this book: When I queried Harlequin about publishing my novel "Cross of Sapphires" they replied they would read the complete ms if I changed the protagonist from male to female. Heroines were in great demand, they said. It was probably an elegant way to the reject my ms, but I took their claim about female protagonists as genuine. So, one of my next novels will have a woman as the main persona, I decided.

Another motivation for writing the Blackpox was that there were/are few novels about political or spying intrigue occurring in Canada. I thought I could find a nice niche for my book, and have a new, interested audience for my story. I like to try different themes, and the idea of a spy plot appealed to me. One of my favourite authors is David Baldacci, and I had a lot of fun with his "Camel Club." So I started my research, read pertinent books, surfed the Internet, and updated myself on the agencies established to protect our country. Well, was I in for a big surprise!

The agencies I contacted, including CSIS (Canadian Security Intelligence Service), CSE (Communications Security Establishment), Public Safety Canada, CBRNE (Chemical, Biological, Radiological-Nuclear, and Explosives Establishment) were unavailable for supplying even the most elementary information about the functioning and structure of their departments; when I pointed out that, as a citizen, I had the right to know a bit more than what was on their Web sites, they referred me to Isabel Scott, the CSIS Media Relations Program coordinator. She refused to answer any of my questions and, when I asked to visit the CSIS headquarters in Ottawa and/or its branch in Toronto (which had appeared on CBC, our national TV station) her answer was astonishing. I was not supposed to know about the Toronto site and I wouldn't be welcome to the building in Ottawa. I was just interested in seeing the conference room they used for media contacts; the answer was that, since I was a fiction writer, I could "invent" such a room. So much for cooperation, I though, mystified. For a while I desisted from pursuing my project. Then an idea popped in my mind: why not turning a negative into a positive? Having the government depends on a person who never had any training in spying or knowledge about CSIS? This would give me a way to introduce Tamara (a cheerful young woman who wants to enjoy life without complications) into the plot. Soon or later I would have to come up with something realistic about the way Canada protect its citizens but I would face that issue at the last moment, and blame CSIS' vague or unrealistic acting on a traitor among their ranks. Being a traitor, he could feed Tamara all sorts of bogey information. Later, I would come to terms with the lack of normal procedures by creating a Task Force, especially targeted to face the impending danger. A Task Force in charge of avoiding a deadly epidemic would have extraordinary powers, priority in accessing government services, and special means required by the circumstances. I worked hard on that aspect and I think I created a realistic setup, good enough to earn my novel a place as Finalist in the Indie Excellence Book Awards (2011) and a First Place in the Royal Dragonfly Book Awards (2012).

Try The Blackpox Threat, you may enjoy it!

• from Bettie Corbin Tucker's review:
This is a mesmerizing novel, and individuals who purchase it will agree with me that it is a "must read." I give The Blackpox Threat my highest recommendation.