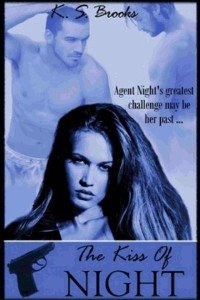 about this book: Special Agent Kathrin Night has a lot to run from: the demons of her past, countless terrorists who would like to see her dead, and the prospect of becoming a civilian. But she can't run; a career-ending injury has her walking with a cane. Enter FSB Agent Aleksey Khovechkin. Russia's deadlist operative is sent not to spy on her – but to protect her – by order of the Minister of Defense. Kathrin isn't convinced the Russians' motives are honest, but has no way to prove it. Will being in close quarters with the gorgeous FSB agent chip away at Kathrin's tough exterior? Or will it unleash a past full of painful memories?

More than a romance, more than suspense, The Kiss of Night is the first book in The Cover Me series which follows Special Agent Kathrin Night after her career as a field operative has ended.

The Kiss of Night was inspired by American Heart Month, and was published in February 2010. Sales that month benefited the American Heart Association.