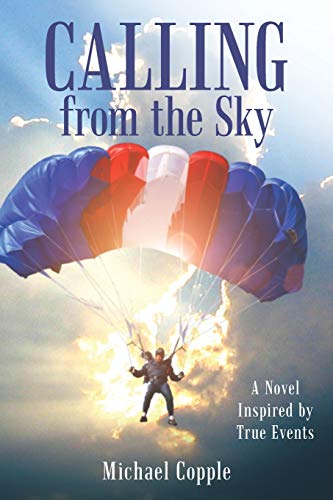 Book: Calling from the Sky - A Novel Inspired by True Events by Michael Copple

about this book: CALLING FROM THE SKY was prompted by the deep gratitude I have for life. Experiencing many "close calls" mostly during seventeen years and over 2000 parachute jumps, my oldest son, Don, said to me, "Dad, you should write those stories down so they don't get lost." This began an autobiography which evolved into a more exciting thriller (since I didn't think anyone would want to read about me, Mike Copple). So the truth became faction (fact/fiction). Part of the fiction are the Russian spies who try to take revenge and kill "Luke" by sabotaging his parachute.

With 26 years on active duty in the US Air Force, I experienced parachute malfunctions like for example being a "hung jumper" outside the aircraft, in a deadly seesaw night jump entanglement with another jumper, and in an 85 mph wind shear. The latter almost took my life.

I hope that you, the reader, will find the detailed descriptions of the malfunctions and their resolve exciting and will, to some degree, answer common questions.

Are you ready to dive into an exciting spy novel that also contains some mystery and romance?