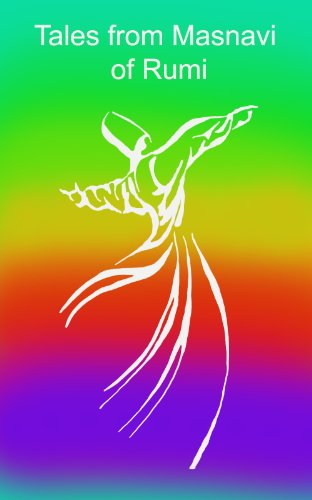 Book: Tales from Masnavi of Rumi by Evren Sener

about this book: These stories seem to be written for children but they are also written for the many (adult) spiritual seekers. If you just read between the lines you will find messages that will help guide you to inner peace and divine love. All readers will love wandering through Rumi's fables and tales of wisdom.

No matter what religion, the truth and delight of Rumi's writings penetrates that wordless place of knowing within every great teaching and every longing heart.

(Jalal ad-Din Muhammad Rumi- MevlanaCelaleddin Rumi)is his full name butMevlanais his popular name known in his homeland, Konya-Turkey. In the English-speaking world, however, he is popularly known as Rumi. He lived in the 13th century, 1207 – 1273.

The day he died is known by all in the Sufi world as Sheb-iArus, the wedding night, the night he met his Beloved. It is a well-known legend that he said these words:

"Do not cry after me.

Tonight it is my wedding night.

I am going to the Beloved."

Rumi had many titles such as poet, jurist and theologian but he is most well-known as a Sufi mystic. In the Sufi world it is also known that he became who he is after being the disciple of Sems-I Tebrizi, another famous Sufi mystic.

Rumi was a well-educated and a learned scholar loved by all but after meeting Sems he went through a change by tasting the real love of God. and letting go of all he had learned This is the basis of Sufism. This ecstatic love turned him from an accomplished teacher and juristinto an ascetic. Rumi believed love and longing for God is the only path for reaching God. For true seekers of God, love is their only religion.

The truth and love vibrating through his work made him heard by people all around the world over the past seven centuries. His teachings are so universal that his poems can be heard in churches, synagogues, Zen monasteries, and in art/performance/music scenes.

Rumi's works are originally written in Persian and have been translated into several languages. In 2007, he was described as, "The most popular poet in America."

His works advocate unlimited tolerance, positive reasoning, goodness, charity, and awareness through love. For him, all religions have the same value and he looks with the same eye on Muslim, Jew and Christian alike. His peaceful, tolerant teaching has appealed to people of all sects and creeds.

With his work and life-style, Rumi tried to spread the idea that people of all religions and backgrounds can live together in peace and harmony. His visions, words, and life teach us how to reach inner peace and happiness. The "INNER PEACE AND HAPPINESS" is the most essential thing.

Masnavi, which is the source for this selection of work, weaves fables, scenes from everyday life, Qur'anic revelations and exegesis, anecdotes and stories full of secrets of liberation of the soul and enlightenment.

Among these selected stories you will find the basis of Sufism and the message it carries out into the world.

"Knowing God starts with knowing yourself and accepting who you are."