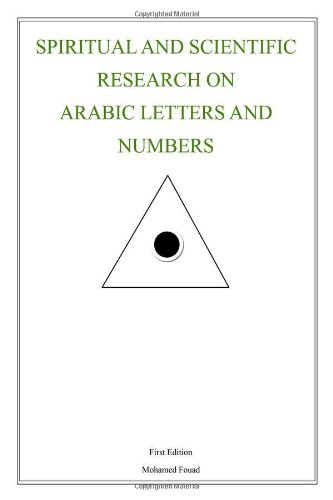 about this book: The book of Science of Abjad is a follow up of my first book of 'Spiritual and Scientific Research on Arabic Letters and Numbers' but this time I went deeper in the search and exploiting the another part of the science of abjad. Abjad is defining normally as a chronogram, a mode of reckoning numbers by means of the letters of the alphabet; it remains a world to be explored.

The world of Science of Abjad may look like a virtual world but it is a reality, it can bring forward new discoveries on different subjects and issues. What I have written in my first book [Spiritual and Scientific Research on Arabic Letters and Numbers] today scientists are sharing the same point of views on different subjects, like the 'First Stars in Universe Were Not Alone' ScienceDaily (Feb. 4, 2011) and Does music affect a foetus [YouTube and MSN] and so on.

The Science of Abjad helps also to understand the verses of the Holy Quran in another way; if we will continue to rely on the textual analysis of the verses it will be very difficult to overcome the frontier of interpretation. We have to transcend this frontier but be very careful to avoid speculation.

Different kinds of lore came forward with the Arabic letters and with their numerical values, like in DNA, the origin of the creation, the elements of nature, in fertilization, honey, the tree of knowledge, chapters and verses of the Holy Quran and so on.

The extrapolation on these different subjects made us understand that the Arabic language in the Holy Quran together which the Arabic Letters and their numerical values is not only a language but also a science. Every word in the Holy Quran has a concrete and abstract part whether scientifically or spiritually.

The science of abjad does exists since a long time ago and Shaykh Ackbar Ibn Arabi [May God bless his innermost being] is the master of this science. He is like a teacher for me by his knowledge of that matter which he has shared in his books, I was inspired and fascinated by it and I should said that it is by his grace and help that I have learned this science.

It is very difficult to trace the origin of this science and who introduced numerology in Arabic letters there is only one saying which was published by Badhawi on that subject who was a Quran commentator but was rejected by the majority of the Muslim saviors and it was considered as a weak saying.

In science as in spirituality they have one thing in similarity; they go on the quest of something. When they experience the reality of what they do, they accept this reality, the only essential difference is that scientist continues to learn, expand their knowledge, while in abstract spirituality the masters have already undertaken the path and knew the beginning and the end of the track.

Scientists need to update their knowledge, align new discoveries, and indeed what they do. The body of knowledge and practices in spirituality is not updating because neither the contention nor the applications are challenged by the facts: the system has already reached its completion. Here we must mark the difference between three distinct areas: the cult, abstract spirituality and science.

The cult did not admit any new information: its basis risk to be shaken. Science must always include new information as it is incomplete. In the abstract spirituality, there is no need of new equipment since the system of knowledge is already full. Misunderstandings occur when people classify these different domains in the wrong categories. They imagine that science is like the abstract spirituality, completed, and that spirituality is an abstract sort of worship, instead of excluding any new knowledge and that the cult is open to new ideas while the cult did not in fact adopt new elements.

a new world of knowledge

The book brought us to a new world of knowledge. What I found in the book about the Science of Abjad is really unbelievable and this has increased my knowledge of the Holy Quran both spiritually and scientifically. [by Niz Liz]